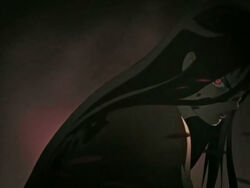 The prologue starts off in a village in the country of Vietnam, many years ago. There was an intrusion of monsters and a girl with a sword killed everything and everyone around her: friends and foes alike, whether they were monsters, villagers or the military. All the while she wore a look of insanity in her expression and most especially her glowing red eyes.

Back to present day, in Okinawa, Saya Otonashi seems to be a normal high school student except for the fact that she has memories of more than a year ago. After a trip to the hospital, with her foster brother, Kai, Saya returns home alone and sees a small crowd around a man playing a cello. The music gives her a strange vision of a girl running in a large castle-like hallway before coming to a stop in front of a door. And there she takes out a key and reaches to open a lock.

Saya tries to call out to stop the girl in her vision, but she ends up tripping into some bushes, attracting the attention of the crowd in front of her, especially the man playing the cello. Embarrassed she runs off and returns home to find her foster father, George, and her little brother, Riku playing catch.

Later the night, at the family restaurant, Saya notices she left her track shoes at school. As she's heading out to the door, she runs into David, a man who has business with her father. After Saya leaves the two men discuss about her, with George refusing to hand Saya over and David ask George if Saya is his replacement daughter. David leaves an envelope of money that he calls this month's share before he walks out.

Sneaking into school, Saya runs into the cellist from before, Haji, who pulls out a dagger, which in turn frightens Saya enough to run the other way before he unfortunately bumps into a teacher. He searches the grounds where she was but can't find anyone. As he passes under a tree walking towards her, a giant arm appears and pulls him up. After various noises, his limp and bloodied body falls down before a large monster soon follows, prompting Saya to run.

At home, Saya's friend, Kaori, comes by with Saya's track shoes before George calls Kai to go pick up his sister.

Saya gets injured by her pursuer and seems to have nowhere to run when she spots the cellist again. He throws a dagger and it takes out the monster's eye, but Saya gets knocked unconscious by the subsequent flailing. Haji takes her body and runs to a science laboratory, and there he tells her that the monsters are called Chiropteran (Yokushu), beasts that feed on the blood of others. While talking, he takes a sword out of his cello case, unravels his demonic-looking hand and cuts it.

When Saya refuses his outstretched hand filled with blood, Haji drinks his own blood. He pushes Saya out of the way when the Chiropteran monster jumps for her.

Kai comes in to see Haji kissing Saya and forces her to swallow the blood. Haji then tells her to fight, evoking in her memories of that night many years ago and of the girl opening the padlocked door in the castle-like tower. And then Saya's eyes dilate red.

Retrieved from "https://bloodplusanime.fandom.com/wiki/Episode_01?oldid=10734"
Community content is available under CC-BY-SA unless otherwise noted.