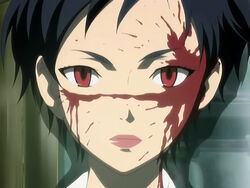 Hagi hands Saya the sword and she squares off against the chiropteran. Lacing the blade with her own blood, Saya, who seems to be in a trance, cuts the monster in half. The monster's body gets cracked and shatters. Then Saya wakes up from the trance and faints after she sees herself covered in blood. Hagi carries Saya and picks up Kai by his collar, taking them both away from the school as the military closes in.  Hagi dumps Kai on the nearby rooftop and disappears after carefully laying down Saya.

The next day, her father comes to visit her at the hospital, bringing food for her growling stomach. David also shows up, and her father leaves the room to talk with him. After eating, Saya is washing up when she starts to have flashbacks of the night before and her bloodstained self. She rushes downstairs to find her father, and sees him and David talking about her. David asks what George plans to do since Saya is always going to fight. He leaves after saying that they don’t have much time. George hears a door open and realizes that Saya overheard their conversation and ran away.

On the beach, Saya hears cello music behind her and turns around to see Hagi. She seems to recognize him, and asks him who he is. He replies that they once again face each other as Kai arrives looking for her. Kai is angry at Hagi for whatever he did to Saya, but when he tries to hit Hagi, Hagi easily throws him to the ground. After Saya protects Kai, Hagi once again vanishes. Saya can remember that she’s seen him before, but wonders what’s going on. Kai reassures her that he and her family will always be there for her and whatever happens, Saya will be Saya and they will always be her family.

Meanwhile, David is in his car and he brings out a photograph. It's shown to be a black and white photo of Hagi beside a long-haired girl who resembles Saya!

After Saya and Kai arrive home, George gets a mysterious phone call with the noise of someone heavily panting and a dog barking. In a phone booth somewhere in the city, a hooded man, whose hands rip open to reveal claws, devours a dog.