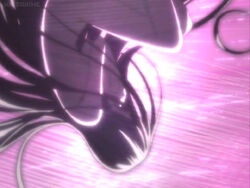 The Place Where It All Started

Saya is feeling down the entire day at school because it seems that everything has been perfectly covered up from the night before, so no one has any idea of what happened.

Her father picks her up after school, after David urges him to give her up again, and drives her to the tomb where he found her. George explains that he was told to watch over Saya during the Vietnam War. He got married and had a daughter, but when his family was killed in an accident, he was ready to commit suicide. However, Saya’s heartbeat told him to keep living, and so he did, raising Kai and Riku who were orphans. When Saya woke up one year ago, he first wanted to kill her but couldn't bring it to him to shoot her, a young girl with an innocent face with no trace of the blood-soaked girl he knew from the war. Then George swore to raise her as his own daughter.

The two return to the restaurant where David is waiting. He explains that he’s part of an organization called “Red Shield,” and that Saya is needed to kill the monsters known as Yokushu or, Chiropteran.

Mr. Forest, an old friend of George’s soon arrives, but transforms half into a Chiropteran. David shoots it several times, but the monster heals quickly and knocks David out against a car. It rushes forward at George and Saya, but Hagi jumps in to block its attack. He hands Saya the sword and tells her to fight, but she refuses to use it. George takes it instead and tries to swing, but the Chiropteran blocks his attack and makes a nasty cut in George’s abdomen. Kai arrives on the scene to see Saya yelling for her father over his body and a pool of blood.

Retrieved from "https://bloodplusanime.fandom.com/wiki/Episode_03?oldid=9857"
Community content is available under CC-BY-SA unless otherwise noted.