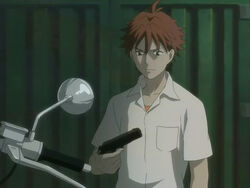 After arriving at the hospital with Saya and the injured George, Kai feels so frustrated that he rushes out. Saya, of course, blames herself for what happened. Her conversation with David reveals that Julia is the medical staff of Red Shield. After Riku comes to the hospital, he and Saya set out to look for Kai.

By that time, Kai, who's yearning for revenge on Forest, sets out with his father's gun. He tracks down one of Forest’s friends, Reimi, at a bar. She goes out after getting a call from him, so Kai follows her. Saya, who is in the same neighborhood, starts to see a red haze and is able to hear everyone’s conversations. When the voices stop, she looks at the moon and hears some strange cries. Riku, Saya, and Kai’s friends arrive at the same bar where Kai just was, and find Mao also looking for him. She helps them search by taking Saya and Riku in her car.

Meanwhile, Kai has followed Reimi to a warehouse. He pulls out the gun, getting ready to enter, but he hears a scream from within. Inside, he finds Forest sucking Reimi dry. Forest sees him and lunges after dropping Reimi. Kai’s gunfire alerts Saya, who gets out of Mao’s car and starts running, eventually encountering the cellist in an alley. She asks for his help in saving Kai because she doesn’t want anyone else to get hurt. The cellist, who introduces himself as Hagi, slits his mangled hand again, and this time Saya willingly drinks from it. Riku, who was chasing Saya, enters the alley in time to see her with blood on her lips. Hagi then takes Saya towards the warehouse, jumping from roof to roof. They arrive there just in time to save Kai, who is out of bullets. The cellist tackles the vampire and holds him off while Saya cuts herself to get the blood flowing into her sword. When Forest charges her, she swings and cuts off his arm, causing him to crystallize. With the battle over, Saya breaks down crying.

As dawn approaches and the Red Shield guy is packing up the bodies, Kai expresses his disappointment to Riku, telling how powerless he is. David asks Hagi if he obeys Saya, but then gets a phone-call from Julia saying that George has been taken away by the US military.

Retrieved from "https://bloodplusanime.fandom.com/wiki/Episode_04?oldid=10743"
Community content is available under CC-BY-SA unless otherwise noted.