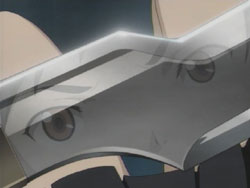 Beyond the Dark Forest

After learning of George’s capture, the group led by David under the Red Shield decide that they’re going to go and rescue him.

Saya overhears a frustrated Kai telling Riku that Saya is different from them. After David reports back to his superiors, Julia shows him some documents that indicate a DNA sequencer has been delivered to a research facility, and the two suspect something is occurring there. Kai walks by while the two are talking and bursts in. David takes him to the roof and shows him how weak he is by dodging his attacks and beating him up a bit in front of Saya and Riku. As Saya is leaving with David to save George, Kai pleas to her that they should go together, but Saya says that Kai shouldn’t go because if anything happened, he’d be a hindrance. Completely defeated by her words, Kai has no choice but to stay.

That night, the group, including Hagi, travels to the facility through a forest, arriving at their drop-off point where Lewis meets them with some weapons and information. Before taking her sword from Hagi, Saya finds a ball of onigiri in the trunk addressed to her from her brothers, telling her to do her best.

Meanwhile, the US military has been ordered to get rid of the facility, and in the facility itself, George wakes up to the noises of something walking around, something that looks like a Chiropteran.

Retrieved from "https://bloodplusanime.fandom.com/wiki/Episode_05?oldid=10711"
Community content is available under CC-BY-SA unless otherwise noted.