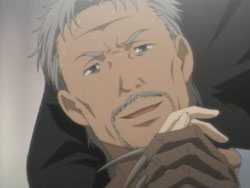 The group of David, Saya, and Hagi infiltrate the Yanbaru facility and make their way underground. David uses a computer terminal to try to find George and dig up information. Meanwhile, Julia learns that the military has ordered that building to be bombed, but she can’t contact David inside because signals are being jammed. Kai learns of this and rushes out on his bike to warn them.

Back at Yanbaru, David fills Saya in on what the US military has been doing: artificially making Chiropterans. And just as David sees a word that catches his eye, “Delta 67,” a Chiropteran jumps down from the ceiling. David tells Saya to fight, but she’s too frightened to do anything, so David has to lay down cover fire so that they can get away. They end up dodging that one monster, but another appears in front of them. Saya has prepared her sword with her own blood, but is still too afraid to use it – she barely pierces her opponent with the tip of the sword. Suddenly, George charges out of the shadows and knocks the monster further into it. As they escape, George tells David that when he woke up, his wounds were healed – it seems that he was administered Delta 67 through an IV. The group reaches the elevator, but it’s in use. They soon find themselves cornered by Chiropterans, but the three men are able to handle them while Saya watches on scared. They close a reinforced door, and all seems to be clear until another one drops in from the ceiling. George charges it, but receives a nasty slash wound. Not letting it slow him down, George impales the monster with his hand, and Saya finishes it off. But George is once again badly wounded, with blood pouring out of his abdomen. Kai arrives in the elevator right after George’s hand has started to transform into a claw. George asks Saya to kill him while he’s still her father. As she cries, Saya takes her sword and cuts her hand. George takes her bloody hand and tells her that he’s still her father, that she should follow the path she believes in, and that she should live today for tomorrow and not forget her smile. Saya’s blood starts to crystallize George’s and he soon passes away.

Several more Chiropterans show up afterwards, but Saya has changed into her killing mode and slays them all. By the time the military jets finally bomb the place, the group has already made their escape, though Saya is now in a daze.

Retrieved from "https://bloodplusanime.fandom.com/wiki/Episode_06?oldid=9860"
Community content is available under CC-BY-SA unless otherwise noted.