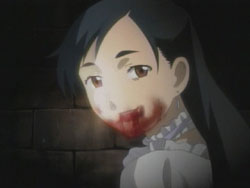 I Must Do It

On board the ship that’s now carrying Saya and others of the Red Shield, Riku is devastated to learn of George’s death. While he shuts himself in his room, Saya dreams of chasing her father in those castle ruins, but then sees a girl whose mouth is covered with blood – a girl who looks like herself.

Kai reminds Riku of the time when they first met Saya, and George brought them out to the sea. Saya had broken one of Riku’s most important books, but George put it back together. Meanwhile, Saya hears Hagi playing the cello, and asks him about her past. Hagi pulls the sword out of his case, and performs a fencing move. Handing her the sword, Hagi replies that her answer lies in fighting the Chiropterans.

Meanwhile, David and Julia are doing research using the data David got. At the same time, the reporter Akihiro is doing his own investigation into what happened, after he visits the bombed out Yanbaru site. Both parties found out about a shipment of wine, and both connect to the wine in Vietnam, which Julia then connects to a special girl’s high school there named Le Lycee des Cinq Fleches.

Meanwhile, Saya starts to practice her swordsmanship in the rain. When the sun finally comes out, Riku hears Saya hope that everyone can smile tomorrow. He remembers George saying something very similar that day by the beach. Saya tells Riku that George’s last words were for them not to forget their smiles. Kai says that they have to do their best, and the three are finally together as a happy family again.

Retrieved from "https://bloodplusanime.fandom.com/wiki/Episode_07?oldid=10744"
Community content is available under CC-BY-SA unless otherwise noted.