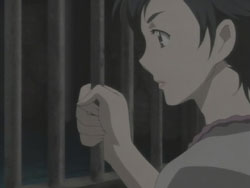 I Want To See You

At the beginning, Karl is seen talking to a blonde man in Paris who mentions the word Chevalier during their conversation. All the while, he has a information card of Saya on his desk with a blue rose on it.

Saya learns from Min that there’s going to be a school excursion to Hanoi. When the two get to their classroom, they find a group of girls gathered around Saya’s desk because of the blue rose on it. The girls speculate that this must be the Phantom’s confession. At lunch, her friends tell her of a forbidden rose garden by the church where blue roses apparently blossom.

After dark Saya heads to the garden with Hagi, and find blue roses growing around the entrance to an underground area. Once they go below the garden, they find that the door to the rest of the area is locked, but Saya does see a container with the number 721226 on it. Ms. Lee hears the rattling from Saya trying to open the door and investigates but she doesn’t find anyone.

On her trip to a war museum in Hanoi, Saya calls David to update him again. After Saya hangs up, Julia suggests that they have a chance to go investigate during the upcoming school dance. Inside the museum, Saya starts to have flashbacks after she sees various photographs of the war, and starts to run in panic. She continues to run in a semi-hallucinating state until she has ended up in a dark alleyway. From out of the shadows appears the Phantom holding a blue rose. Hagi intervenes and throws Saya her sword, but the Phantom knocks him into a wall where he’s buried in debris. As the Phantom tries to stir her memories of that fateful night long ago, Saya’s eyes start to turn red. But after she remembers the words of Kai, Riku, and her father, and she turns back to her normal form. She cuts off the Phantom’s arm, and tells him that she accepts her past. At this point, Hagi emerges and the Phantom decides to retreat. But before he goes, he reveals himself to be Karl, the director of the school.

Retrieved from "https://bloodplusanime.fandom.com/wiki/Episode_10?oldid=9864"
Community content is available under CC-BY-SA unless otherwise noted.