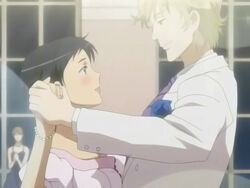 For the ball dance, Min supplies Saya with a dress. When the night comes, Saya attracts everyone’s attention because she’s the girl Phantom gave a rose to. With Min off flirting with boys, Saya stands by the food table until David and Julia show up. David is going to the area under the rose garden to investigate the container suspected of carrying Diva within.

A mysterious, blonde, well-dressed foreigner with a blue rose soon arrives and makes all of the girls swoon. Much to everyone’s surprise, he passes Anna-Marie to dance with Saya. Saya seems mesmerized by him. But they only get one dance in before Van Argiano comes and pulls him off to show him the appearance of their experiment. His name is revealed to be Solomon. Before he goes, Solomon pins a blue rose in Saya’s hair.

Outside, Saya senses Karl and chases after him with Julia and Hagi. Meanwhile, David has made his way underground to the container, which has been loaded onto a truck. He figures out that the container holds Diva.

The reporter Akihiro, who was turned away at the gate, follows the truck in, but is caught and knocked out.

David tries to stop the truck with his gun, but the bullet is blocked by Karl. Saya, Julia, and Hagi arrive to fight, though they have a hard time with the Phantom. Saya even goes into her killer mode, but Karl is able to easily slash her several times, and then catches her sword in his hand. When he inspects her face, Karl realizes that she’s not fully awoken yet, and so he leaves the fight.

Akihiro, who had woken up, had been taking pictures of the battle until he got knocked back into a wine rack. He picks up one of the bottles and realizes that it’s dated 1967.

When the Red Shield group makes their way back above ground, they are seen by Min, who is shocked when she spots Saya all bloodied up. Without an explanation, Saya boards a waiting car to chase after the truck, though afterwards, she regrets not saying something.

Retrieved from "https://bloodplusanime.fandom.com/wiki/Episode_11?oldid=9865"
Community content is available under CC-BY-SA unless otherwise noted.