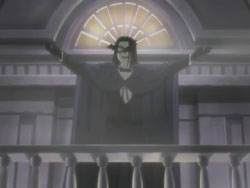 Lured By the White Mist

After David explains to Saya that the person who protects Diva is a Chevalier, their group is joined by four more Red Shield people: Kurara, Spencer, Makkoi, and Rodgers. As they head down the river past Vietnam War ruins, Saya starts having more and more flashbacks of her past.

The group eventually arrives at a landing spot and makes their way towards the building where Van Argiano, Solomon, and Karl are at. Karl seems excited and opens the container to reveal something that surprises even Van. Solomon, however, remains unsurprised donning on the fact that he has a better knowledge of what's going on.

Kai, who was captured along with Riku and Mui, escapes from their prison and frees his brother. But with the container now open, the boys are surrounded by a bunch of red-hooded children who are attracted to a woman singing. These kids, who are all experiments of Delta 67 and are themselves singing, run out of the house and apparently follow Karl, who welcomes Saya and company. Their armed force is surrounded by the children, and Hagi throws a dagger at one of them. Kurara starts to scold him for attacking a child, but stops when she sees the dagger pop right out and the wound heal. The red cloaks mask the grotesque births of small Chiropterans out of these children’s bodies. The group fights their way into the building, but Makkoi and Rodgers are killed while guarding the rear.

Inside, Kurara demands to know why Saya isn’t helping them fight, but Saya replies that it’s because of the song. As they get overwhelmed, one of the Chiropterans approaches a wide-eyed Saya, but she can only sit, frozen in place. Hagi has to behead the monster with his claw, an act which splatters blood over Saya’s face.

Retrieved from "https://bloodplusanime.fandom.com/wiki/Episode_12?oldid=9866"
Community content is available under CC-BY-SA unless otherwise noted.