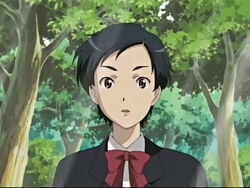 Saya, Kai and Riku return home to the restaurant in Okinawa where everything has been gathering dust since they left. David and Julia, who remained back on the ship, get orders to go after a person named Ted A. Adams, a man apparently deeply connected with Chiropteran and Delta 67 research.

While Saya rests, Kai digs into the closet and finds some of George’s belongings, including his baseball glove. The three pay a visit to the grave and leave George’s stuff there as a way of sending him off. There, Kai is surprised to see the inside covered in cobwebs. Saya tells them that this is the place where she started her current life. Kai and Riku reaffirm that they’re all family, just like George always said.

After having lunch, Kai takes Saya to the park, where she’s reunited with her friend Kaori. The two quickly start talking about normal life. But Saya knows that she has to get stronger and continue fighting so that more people aren’t hurt. Kaori offers support and comfort by hugging Saya’s back and telling her that she doesn’t have to suffer alone. The two, along with Kai and Riku, then go to school so that Saya can try the high jump one more time.

Afterwards, Saya and Kaori buy some food so that they can hold a barbeque. Kai’s friends happen to spot Kai on the beach, and join them for food and fun. Riku even brings food to Hagi, who is standing off on the side, and tries to get him to join everyone, but Hagi keeps his distance. While the rest are playing with fireworks, Saya and Kai talk on the beach. Saya asks Kai to always stay by her side, so that they can all stay a family. Kai promises not to be separated from her again and promises to find her wherever she goes. Saya joins the fireworks fun, and Hagi breaks out the cello for some music.

In the morning, while everyone is still sleeping on the beach, Kai, Riku, and Saya take off, though Kaori wakes up in time to wish Saya a tearful goodbye. It seems that the next destination for the Red Shield group is Russia, but Saya vows to return to Okinawa.

Retrieved from "https://bloodplusanime.fandom.com/wiki/Episode_14?oldid=10745"
Community content is available under CC-BY-SA unless otherwise noted.