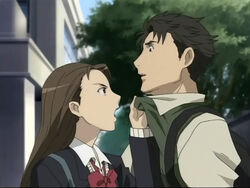 I Want To Pursue

On a U.S. aircraft carrier, Solomon meets with the third Chevalier, James, and leaves Diva in his hands.

Back in Okinawa, the reporter Okamura brought back a sample of wine and the photographs that he took at the school in Vietnam. He makes the connection between Saya in his photographs with the girl in the photographs his father took over 30 years ago. In his investigation, he first takes the wine to his professor acquaintance to have it analyzed. From there, he goes to the hospital, where he learns about the incident with George and that takes him to the family restaurant. Then, from his colleague, he learns about the entire family of George, Kai, Riku, and most importantly, Saya. Pursuing that lead, Okamura goes to Saya and Kai’s school, where he talks to and shows Mao and Kaori the pictures. Kaori stands up for Saya and tells Okamura to leave her alone, but Mao decides to listen to what he has to say.

During their meeting, Okamura’s cell phone rings with a call from the professor. It seems that his office was ransacked and the wine was stolen (Lewis is the one who stole the wine which can be seen in his hands as he walks by Mao and Okamura in the restaurant). Mao then tells Okamura that Saya and company had come to and left Okinawa the day before. But since no one knows where they went, Okamura’s remaining clue is that the wine’s connection to France. The reason Okamura can’t follow that up is because he’s lacking the funding to go, which Okamura estimates to about five million yen. Mao leaves after hearing that number, and Okamura assumes that it was too much for her. To his surprise, Mao shows up again at a restaurant saying that she’s running away. In her suitcase, she has 50 million yen taken from her father. Mao agrees to sponsor him if he will abide by two conditions. First, she must be allowed to go wherever he does to collect information. And second, Okamura is not allowed to smoke in front of her. Just like Okamura is searching for Saya, Mao is on a quest to find Kai.

Retrieved from "https://bloodplusanime.fandom.com/wiki/Episode_15?oldid=9869"
Community content is available under CC-BY-SA unless otherwise noted.