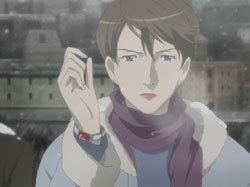 The group arrives in Vladivostok, Russia and meets a Red Shield agent named Elizabeth. Kai gets all flustered when she greets them with kisses to the cheek. They are headed for Yekaterinburg via the Trans-Siberian Railroad.

While getting on the train, Riku and Hagi help an elderly woman wearing a mysterious blue ring. The first leg of the ride is relatively uneventful except for Kai making a ruckus about room assignments. In the dining car some days later, Lewis shows off a box of candy he got from a pair of kids going to Paris who wanted to be introduced to Julia and Elizabeth. Riku spots the elderly lady he had helped earlier, and Hagi gives up his seat for her. She tells him that she’s going to Moscow to see her great-grandchildren. Across the aisle, Elizabeth tells the Red Shield members about her experience in Afghanistan where her entire force was annihilated by the Chiropterans. As Elizabeth leaves, she is being watched by the elderly lady. That night, Elizabeth’s naked body – with a neck bite mark, is dumped off the train.

Saya is getting a blood transfusion when she asks Julia about her past and what happened in Vietnam 30 years ago. But Julia tells Saya that she has to remember for herself. Meanwhile, Hagi is teaching Riku to play the cello when both of them and Saya detect Chiropterans; it seems that the kids going to Paris were injected with something. Saya and Hagi quickly take up arms and start to fight. Hagi chases one of them on top of the train while the rest of the group runs for the rear. He goes for a lunge, but instead gets impaled by the Chiropteran’s feet. Fortunately, Saya is under him and pierces through the roof with her sword, killing that one. Lewis gets the stored armaments and starts blasting the remaining one. They manage to shoot it until it falls off and gets crushed by the train or so they think until it grabs Riku’s leg and pulls him off. Saya cuts off the Chiropteran’s arm while Hagi leaps to grab Riku. Unfortunately, all three of them are no longer on the train. Kai wants to jump after them, but David holds him back. They hear Julia’s yell from the other side of the car, and turn around to see Elizabeth (who is now sporting the blue ring) jumping off. Lewis gets the train to stop and the rest of the group initiates a search. Somewhere in a field of snow, Saya lays unconscious.

Retrieved from "https://bloodplusanime.fandom.com/wiki/Episode_16?oldid=9870"
Community content is available under CC-BY-SA unless otherwise noted.