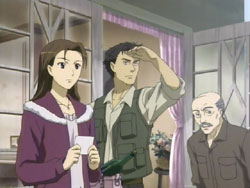 The Schiff are down to eight now that Dismas & Gestas have been killed. One of remaining, Ghee, admires the full moon, but says to himself that if he doesn’t do something, he won’t be able to see the next one.

From Iceland, Van Argiano reports to Solomon that they’ve found a gene manipulation facility, sponsored by a man named Goldsmith. But after Van mentions an accident and corpses devoid of blood, Solomon tells him to stop the investigation and quickly hangs up the phone.

Meanwhile, Mao and Akihiro have made their way to the French countryside, but their car has broken down. While Akihiro is getting water, Mao daydreams that Kai has found her. Solomon drives up to their stalled car, stops to talk to Mao, but then decides to zoom past using the side of the road. Mao recognizes him as the CEO of the Cinq Flèches Group. She and Akihiro eventually make their way to a farm where they inquire about the Chateau Duel. The old man tells them that all of the bad 1967 wine was bought by the Cinq Flèches Group. Mao notices that the building isn’t the same one as on the label of the wine. The old man identifies the chateau in the label as a place over the nearby hill. It was owned by a man named Joel Goldschmidt. The story is that there was a fire that killed everyone 100 years ago. However, it is said that people inside had their blood sucked dry and were dead before the fire. In addition, there was a girl with a blue rose seen there.

Also in the countryside, Hagi and Saya are nearing their destination, but Saya has grown weak from not eating. Hagi offers her his blood, but she resists and continues walking. As day turns to night, the two find themselves on a bridge surrounded by the Schiff. With Saya in his arms, Hagi jumps away, but the Schiff are in close pursuit. Ghee, who is watching from the sidelines with Irene, talks about needing a special blood to purify his cursed body. Irene becomes alarmed that Ghee’s arm has developed cracks and red markings. Hagi hides Saya in a tree trunk and then tries to protect her from their opponents. He does well in handling all of them until he realizes that Ghee is going after Saya. He tries to turn around, but the Schiff work together and manage to impale him twice. With Karman’s weapon still protruding from his chest, Hagi confronts Ghee. Ghee feels that he doesn’t have much time left, so he quickly pins Hagi to a tree and drinks his blood. As the other Schiff arrive on the scene, they see the markings on Ghee’s arm. Saya emerges from her tree trunk calling Hagi’s name, but Irene is waiting behind her. Saya narrowly avoids Irene’s sword, but the rest of the Schiff get alerted to her presence. She tries to threaten them with her blood, but they don’t fear it as their hopes lie in it. Because cracking has spread to Ghee’s face, the urgency of the situation goes up a notch. Karman pulls Irene’s sword out of the ground and is about to stab Saya, but then dawn approaches. Their weakness being sunlight, the Schiffs have no choice but to flee. Hagi dislodges himself from the tree and stumbles towards Saya. He gives Saya a drink of the blood coming from his hand to wake her up. Having seen Hagi take so much damage just to protect her, Saya apologizes.

On his final resting place, Ghee tells the others that his death is satisfactory because he was able to verify that Chevalier blood didn’t purify his body. His last wish is to walk under the sunlight someday. As the rest of the Schiff watch, his body is bathed in the sunlight and starts to burn a fiery green.

Retrieved from "https://bloodplusanime.fandom.com/wiki/Episode_21?oldid=10930"
Community content is available under CC-BY-SA unless otherwise noted.