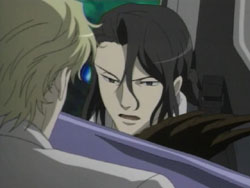 As Solomon comes down the steps reaffirming that Saya and Diva are family, Hagi steps in and charges. He stabs right through Solomon, leaving a gaping hole. Being a Chevalier, Solomon heals the wound quickly and properly introduces himself. He tells Saya that he only wants to talk, but Hagi tries to attack him again. This time, Solomon stops Hagi’s arm and asks Saya to trust him. Because Saya wishes it, Hagi backs off and lets her go off with Solomon.

Meanwhile, at the gates of the estate, David, Lewis, Kai, and Riku split up to search the 100 acres for Saya. Back on the Red Shield ship, Joel and Collins are talking about Joel I whom the current Joel succeeded three years ago. Collins pardons himself so that he can go investigate the matter of Riku from the report that he got.


Saya and Solomon walk to a nearby bridge and Solomon confesses that he’s here to end the pointless fighting. He asks Saya if she knows why this place is called the Zoo. He goes on to explain that unusual plants and animals from around the world were collected here, and there was a laboratory trying to create a new type of creature. Saya and Diva are no exceptions – they were experimental subjects meant to satisfy Joel Goldschmidt’s curiosity. Solomon knows all of this because he’s related by blood to Saya, because he’s her real family. However, Saya refuses to acknowledge that Riku and Kai are her fake family. Solomon also reveals that Saya and Diva, after they are done with their short activity period, go through a period of roughly 30 years of sleep inside of a cocoon. Hearing that, Saya is reminded of the place where George found her.

On his search for Saya, Kai comes across a metal plate labeled 1833. He’s remembers the picture of Saya’s mother that David had shown him: it was a Chiropteran. Solomon affirms the same thing that David told Kai: Saya is not human, she’s a Chiropteran. Her blood makes her the queen of the species.

Saya gets especially caught up on the fact that her blood is the same as Diva’s. Solomon then starts reminiscing about the dance at the school in Vietnam, before they had known each other as enemies. He blames the resulting tragedies on the influence of humans in raising Saya. Saya once again tries to say that her family wasn’t fake, but Solomon temporarily disappears. During this time, Saya can hear his words bouncing around, trying to convince her that the humans were only using her. He reappears when Saya starts to cry and tells her that Amshel and the other Chevaliers are trying to kill her. However, he doesn’t want her to die and gives her the option of joining him. Saya almost takes his outstretched hand, but Hagi calls out to her, telling her not to go. Hagi says that he took an oath to grant Saya’s wishes and to never hand her over. Finding that regrettable, Solomon attacks. Their fight leads them into the woods, away from Saya.

Somewhere on the estate grounds, Riku starts hearing the song and gets drawn towards the ruins of a tower. He thinks that it’s Saya and starts going up. Saya, on the other hand, is searching for Hagi and Solomon, but notices blue rose petals floating in the river beside her. She also starts to hear the song and rushes towards the tower. When she gets there, she finds a girl resembling her, only with the exception of blue eyes, sucking on Riku’s neck. She remembers that on that night so many years ago, it was the same girl who had been drinking Joel’s blood. Diva’s eyes glow eerily blue as Saya screams in horror.

Retrieved from "https://bloodplusanime.fandom.com/wiki/Episode_23?oldid=12570"
Community content is available under CC-BY-SA unless otherwise noted.