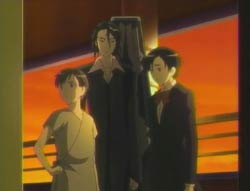 Those Who Serve Saya

Riku, now a chevalier, wakes up and really wants to see Saya. However, he is disappointed when only Kai shows up.

In Paris, Diva is ripping apart stuffed animals and dolls while Solomon asks James if he thinks that Amshel is hiding something from them. James is more concerned about Solomon’s own loyalties. To herself, Diva says that she wants to meet "that person".

Back on the Red Shield ship, Kai is trying to get Riku to eat. For Riku’s sake, he wants Lewis to make a soup, but it’s become apparent to Lewis how protective of Riku Kai now is. Lewis reports this to David, who thinks that Kai should be able to understand Riku’s state since he’s read Joel’s dairy – Riku doesn’t need food or sleep any longer. Speaking of not needing food or sleep, Julia has been studying Riku non-stop. She talks of the possibility of Riku having the same abilities as Hagi. Lewis is concerned for her health, but Julia doesn’t want to betray Collins’ trust.

While watching the sunset, Saya confides to Hagi that she doesn’t know how to look or speak in front of Riku. Hagi gets on one knee and tells her that she had the same face back during that time when he became a chevalier. He wants her to be herself, and promises to be with her wherever she goes; Riku is the same. At that time, Kai is still being protective of Riku by not allowing him to walk and not telling him what happened back at the zoo. When he runs into Saya and Hagi, Riku’s face lights up. He proposes to Saya that they explore the ship and Saya goes along after some encouragement from Kai. After the others walk off, the lonely Kai remembers David telling him that Riku is different from before and now needs Saya. Kai was distraught about Riku’s time stopping, but David had said that it’s Kai’s duty to catch Riku now that George isn’t around anymore.


That night, Riku gets up because he can’t sleep. Kai also wakes up and offers to get Riku the water that he says he needs, but Riku really just wants some independence. He ends up on the deck of the ship with Hagi, talking about how he feels strange. He asks Hagi about the girl from the zoo, and Hagi replies that it was Diva, the enemy whom they must defeat. Both of them suddenly sense the presence of the Schiff nearby, as does Saya. The Schiff had detected Saya since the ship was near port. In the state of emergency, Kai grabs his gun and heads out. Meanwhile, the Red Shield guards are no match for the Schiff. Irene senses Saya waiting for them on the helipad on top of the ship. When they get there, neither the Shifu nor Saya and Hagi waste time talking, and the fighting starts immediately. Kai arrives after it has started, but then spots Riku watching from nearby. David and Red Shield personnel have also joined the battle; they are little more than cannon fodder for the Schiff. The body of one of them lands right beside Riku and the sight of blood triggers a reaction in him.

Kai pushes Riku out of the way of one of the Schiff, but then is unable to stop them from advancing towards them. Saya has to come in and block the attack so that Riku and Kai can get away. However, when he sees Karman trying to flank Saya, Riku turns back and grabs onto Karman’s weapon. Karman throws Riku against a wall and stabs him in the shoulder. He then charges Saya, but Hagi stops him. Kai rushes over to Riku, and Saya and Hagi try to protect them. Everyone notices that Riku can heal like a Chevalier. One of the Shifu tries to attack again, but gets cut in half by Saya. Moses decides that they should leave for now because Saya is different from before and now has two Chevalier.

After the Schiff retreat, Riku opens his eyes and sees that his wound is gone. He’s figured out that he’s the same as Hagi now. However, Riku then collapses onto the ground, saying that his chest feels hot. In his sights is the bleeding body of a Red Shield guard. David reveals that Chevaliers need a large amount of blood so that they can regenerate their wounds. For the sake of his little brother, Kai opens his shirt and offers his own blood. Riku takes a long drink, and afterwards, mentions how warm Kai is. Riku thanks Kai, with both sadly acknowledging that things won't be the same.

Retrieved from "https://bloodplusanime.fandom.com/wiki/Episode_26?oldid=12569"
Community content is available under CC-BY-SA unless otherwise noted.