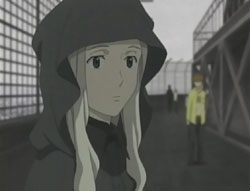 Kai is at the top of the Eiffel Towers thinking about earlier battle on the Red Shield ship and wondering what the Chiropterans are. He recognizes a cloaked girl nearby – Irene. A little boy bumps into her, so she helps him back up. He thanks her, but she seems to not understand what “thank you” means.

Elsewhere in the city, Saya and Hagi are having a sparring match. After they finish up – with her being the apparent victor – Saya walks in on a conversation between Lewis and David about some recent deaths. They don’t know whether Chiropterans, the Shifu, the Chevaliers, or Diva is responsible. Saya says that she won’t allow any more victims and then heads out to the library.

Kai follows Irene around the city, watching as she takes in her surrounding, be it flowers in front of a florist, a dog on the street, or a clown handing out balloons. He sees her go into an alley and then the balloon come floating out. She gets mugged, but manages to restrain her Chiropteran urges. Kai beats up and scares off the thugs for her. He notices that she’s looking at the blood on the ground left by the thug and asks if she wants it. He also asks why she didn’t retaliate against her assailants, to which Irene responds that she doesn’t want to kill anyone anymore. The clouds then part to reveal the sun, causing Irene to try to scurry out of the light’s way. She collapses on the ground, and Kai wonders what she is. Irene has a vision of herself floating in water and reaching towards the sun. When she wakes up, Kai is still by her side, though he’s moved them into a tunnel. He asks her what the Schiff are, and she reveals that they were made by man in a place called Khirbet.

During this time, Saya has been researching something in the library’s microfilm archives. As she’s leaving, she passes by Okamura and Mao, though neither side sees the other. Okamura has finally made the connections between Goldsmith and Goldschmidt. He explains that in the 1830s when the zoo was being built, Goldsmith and Goldschmidt were just branch families. Goldschmidt had disappeared from history whereas Goldsmith stayed. Their fortunes were made during World War II, and now the Cinq Flèches Group, which is related to the Goldsmith family, has connections with hundreds of companies.

Irene explains to Kai that the Schiff were bred to fight and did so all the time against normal Chiropterans under watch of doctors in a lab setting. This included Amshel. And although they could regenerate their wounds, there was the Thorn stigma that plagued them. They watched as comrades crystallized and died one by one. Then one day, Moses said that they should break out. If they waited around, the Thorn will undoubtedly appear in each of them. Moses wanted to believe in the word “hope” that’s written in the books of man. They accomplished their escape, but in the process had learned that they were created as disposables. At this point, Irene shows Kai that she has developed the red cracks on her neck – that is Thorn. For the sake of curing themselves, they need the blood of their origin – Diva’s or Saya’s.

As the sun sets, Amshel tells Solomon not to worry about what happened back at the zoo. Solomon is actually more concerned about the Shifu and why Amshel secretly created them. Amshel’s answer is that the Shifu are one of their insurances for the future, and that Solomon should just leave everything to him. Solomon starts to protest, but the arrival of Diva interrupts their conversation. She has a new dress and wishes to go out to play.

Meanwhile, Kai tells Irene that he can asks Saya for her blood; that way, she won’t have to kill. He suggests that she only has to say “thank you” after receiving it. Irene still doesn’t understand what that phrase means since it wasn’t important enough for them to be taught about. Kai carries her on his back to Saya and starts talking about his own role and how Riku became a Chevalier. Irene says that she’d be happy if a person like him was waiting for her return. She’s happy that they were able to talk today and then says her first “thank you” to Kai.


Saya gets a call and gets ready to head back, but she starts to hear a song. Irene hears the same thing, and she sees Diva pass by in a car. She starts running in the other direction, with Kai chasing after her. On the other side of the road, Saya sees Diva getting out of the car, but she also sees Kai chasing after Irene. She seems split about whether to go after Kai or to go after Diva. Kai chases Irene until she finally stops out of range of the song. The other Schiff appear to take Irene back, and she asks them not to kill Kai. Saya, who had chosen Kai over Diva, appears, but gets attacked by one of the Schiff. When Hagi also joins the battle, Moses and the others retreat with Irene. Kai asks Saya to believe in him when he says that the Schiff are not their enemy.

Back at the library, Okamura has made a discovery: the photo, dating back to the 1800s, of Saya and Hagi.

Retrieved from "https://bloodplusanime.fandom.com/wiki/Episode_27?oldid=9881"
Community content is available under CC-BY-SA unless otherwise noted.