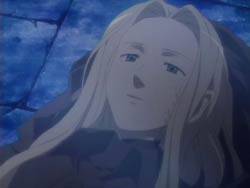 Kai reports back to David about what happened with the Schiff. Kai admits to have heard the Schiff side of the story: how they were artificially created and how they need Saya’s blood to live. Saya asks Hagi later if he feels that the Schiff really aren’t their enemy. Hagi responds that the Schiffs' murderous intent was real back when they attacked during the Ghee incident. Saya thinks about what Kai has said. To Kai, everyone has changed except for him.

Meanwhile, at the Schiff hideout, Irene’s condition is getting worse from the Thorn. She tells the others that her time with Kai was fun. Irene starts wondering aloud if they can become someone’s memories. She finally understands that if they don’t live on in someone’s memories, they will just disappear. And Kai had recognized her as a person, not a tool. To save her though, the Schiff decide that they must get Saya’s blood.

Kai finds Saya in the courtyard of the apartment practicing with her sword. Her intent is to continue fighting the Schiff because they won’t hesitate to kill her. It’s her responsibility to defeat Diva and the Chiropterans since she was the one who set Diva free. Kai argues that even man has its share of good and bad people. If all Chiropterans were bad, then Saya and Riku would also count as enemies of man. Saya counters by saying that if the Chiropteran weren’t around, then their father wouldn’t have died. Kai asks Saya if she’s just going to ignore the other side and massacre them all. Saya thinks that Kai has changed, but he disagrees. During all of this, Riku and Hagi have been watching from the rooftop. When Riku asks what he’d do in this situation, Hagi says that he’d only watch. Riku admires how strong Hagi is and wishes that he himself could do something for Saya. Hagi says that there is something that only Riku can do: stay by Saya’s side forever. Riku says that Hagi can also do this, and Hagi starts to respond, but doesn’t finish his sentence.

Kai tells Saya that he’s decided that no matter what burden she takes on, no matter how she and Riku change, he alone will not change. He then gets interrupted by the appearance of Mao and Okamura, who have finally found their targets. David, who came down with Lewis, immediately recognizes Okamura from their last encounter.

Back on the Red Shield ship, Julia is giving a report to Joel and Collins about Riku and her discovery of the fifth nucleotide base in his DNA. She talks about his molecular structure being re-written, allowing the transformation of a person to a Chiropteran. Julia has named this the D nucleotide base – D for disguise. Joel is worried about fighting this type of perfect life, but Julia says that if that were the case, then the Chiropterans would rule over everything on the planet. Collins says that there’s still a lot they need to learn about this and Julia agrees.


David locks Mao and Okamura up until the group is ready to see them. Saya asks if Mao would go back home without hearing anything, but Mao isn’t about to go back empty-handed after having taken 50 million of her father’s money. Lewis says that if 50 million is all it takes, regardless of whether the currency is yen, dollars, or euros, he can have that much cash ready in an hour along with a plane ticket. Mao tries to plead to Kai, but he also wants her to return to Japan. Okamura starts revealing all the puzzle pieces he’s connected, and David realizes that it’s impossible for him to just tell Okamura to forget everything and return to Japan.

Suddenly, one of the walls in the room explodes – the Schiff are here. Saya, backed up by Hagi, draws them outside and away from everyone else. Kai readies his gun and tells Mao that this is why they wanted her to leave. Riku does his part by pushing Lulu out of the room into the courtyard below. Irene also appears, but in her weak state, she gets shot in the shoulder by David. Kai steps between David’s gun and her, and then runs over to her when she falls down. When the Schiff hear Kai yelling for Irene to open her eyes, they rush to the apartment and push Kai out of the way. Saya chases them inside, but Kai stops everyone and begs Saya to give Irene some of her blood to save her.

Retrieved from "https://bloodplusanime.fandom.com/wiki/Episode_28?oldid=11939"
Community content is available under CC-BY-SA unless otherwise noted.