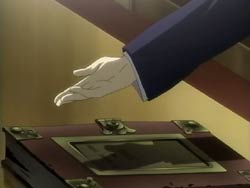 Kai finds Saya standing on a street in the rain, without an umbrella. Since Saya is still troubled, Kai tells her about Joel’s diary and directs her to go see him. With Kai’s umbrella, Saya rushes off to the Red Shield ship and meets with Joel.

The diary starts in 1832, when Joel created the zoo for the purpose of private research – he was especially interested in the evolution of living things. He had found a mummy in Iceland named “Saya.” The diary reveals the timeline of events:

April 8th, 1833 – The mummy arrives in the "Zoo". He had thought that this mummy would give an answer to evolution, so he and his assistant Amshel had dissected the specimen. Inside, they found two small cocoons. When Amshel was trying to open one of them, he accidentally cut himself. The two men noticed that the cocoons absorbed and reacted to the blood.

August 4th, 1833 – Two baby girls emerge from the cocoons. One of them was taken as an experimental subject and remained unnamed. The other was named Saya and raised normally. To Saya, Joel was a kind father, but to the experimental baby, he was a cruel researcher. Left mainly in the care of Amshel, that baby was given minimal food and had no education or love.

June 2nd, 1863 – For several years now, Saya and the other girl have not aged – their time had stopped. On this particular day, Saya had scraped her hand, but when Joel went to wipe it off, it had already healed. He discovered that when the two girls’ blood was mixed, it would crystallize. Joel then introduced Hagi as a groom for Saya, so that they could conceive a child specimen.

When Saya and Joel reach the burned part of the diary, Saya realizes that it was she who let Diva free and she who gave her the name:

1883 – Saya had heard a singing voice one day, and she proceeded to search for that person every day. She eventually found the other girl, and the two introduced themselves. Since the other girl didn’t have a name, Saya named her Diva because of her beautiful singing voice. Saya had wanted to be friends, and Diva had dropped down a blue rose as a sign of friendship. While Joel was involved with his 72nd birthday preparations, Saya sneaked into his office and stole the key to Diva’s cell. She had set Diva free so that the girl could come and sing at Joel’s party, but Saya never saw Diva because Hagi called her away.

The current Saya feels responsible for what ended up happening on that day. What’s more, she feels that she’s the same as Diva after what happened in Vietnam:

1972 – With all of the Chiropterans in Vietnam, Red Shield was positive that Diva was around. They woke Saya with an injection of Hagi’s blood. However, Saya went berserk and killed everything, including the soldiers who tried to stop her and the Chiropterans she was drawn towards by Diva’s song. Karl had attacked her and pinned her down, but Hagi saved her by tossing a dagger into Karl’s eye. Saya managed to cut off part of Karl’s right arm, forcing Karl to rip the rest of it off to prevent the crystallization from spreading to the rest of his body. Saya had chased after the fleeing Karl and tried to kill the villagers in her way. Hagi had stopped her, but she cut off his right arm in their ensuing fight. Hagi’s voice couldn’t reach Saya in that state, and she was only distracted from him by the arrival of more soldiers for her to kill.

Joel reveals that Hagi had disappeared after the incident. Red Shield confirmed him in Hong Kong, but they weren’t able to detain him. When the American military rescue unit finally arrived at the earlier scene, Saya was already asleep. The David there – the current David’s father – had entrusted her with George before he died from his wounds. Red Shield has been waiting for her all this time to wake up and now she’s here.

Saya has one final question for Joel: does he regret succeeding the name of Joel? He responds by saying that nothing can be regained by looking back on yesterday. Figuring out what to do about tomorrow, thinking about what it means to be human – he took on the Joel name so that he could finally end everything. Those final words remind Saya of one of the times right before she went to sleep. She had made a promise with Hagi right before he covered up her coffin.

The current Saya returns to Kai, who has been waiting at the same spot he found her because she had taken the only umbrella to the Red Shield ship. Riku and Hagi join them, and all four head back to the hotel. At a crosswalk, Saya tells Hagi that she’s remembered their promise. Hagi says that he will stay with her until her wish is granted. Kai hears this and watches as the other three cross the street. He realizes that he also needs to go across, but it’s too late – a sea of cars separates him from Saya, Hagi, and Riku.

Retrieved from "https://bloodplusanime.fandom.com/wiki/Episode_30?oldid=9884"
Community content is available under CC-BY-SA unless otherwise noted.