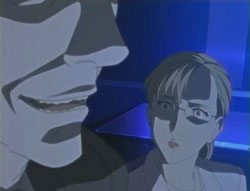 The World Where We Exist

Kai instantly recognizes that the figure in the distance is none other than Saya. She cuts her hand, letting her blood flow into her sword. When the first Chiropteran charges her, she slices off its arm and then stabs it, killing it through crystallization. The next one leaps for her and is about to take a swing at her, but one of Hagi’s daggers pierces it in the eye. Saya cuts through this one, then looks back into the fog where Hagi has now appeared. The third one also attacks, but she slashes right back at it. However, it survives the attack because the blood on her sword ran out. Saya cuts herself again and rushes forward, but she falters and has to lean against a pole. While she’s is standing there breathing heavily, the Chiropteran takes the opportunity to escape by jumping away. Lewis and Kai run up to her, asking her where she’s been until now. Saya gives them a stare and starts to walk away, saying that she’s going after the Chiropteran that ran away. Lewis asks if they are or aren’t still friends, and Hagi says simply that they aren’t enemies. Saya stops walking long enough for Kai to try to approach her again. She never finishes telling him not to come because she faints. Kai wonders if she’s injured, but Lewis realizes that Saya hasn’t been eating (having blood transfusions) properly.

At the American research lab, Julia is keeping watch over a Corpse Corps soldier standing in a cell. Collins walks up and talks about how these are such splendid living things, able to go from birth to combat in just 48 days. He notices that Julia is looking very tired, but Julia denies it. She wonders if the soldiers are going to be people or things. Collins says that she’s falling into the common trap, thinking that creating life is a privilege given only by God. He talks about how organ transplants, gene therapy, and cloning techniques are all blasphemies to God – isn’t mankind’s arrogance trespassing on God’s domain? But Collins doesn’t think much of ethics and says that their little experiment is a perspective into the existence of omnipotence. He tells Julia that she’s feeling the uneasiness of being chosen and instructs her not to be hesitant. From a different room, Van is listening in on their conversation with a smile on his face.

Back in England, Saya has been brought to Glay’s home. As morning dawns, David learns from Monique that Saya and Hagi are here. In a room upstairs, Lewis explains the situation in London to Hagi and how the rumors peg the culprits to be vampires. He asks Hagi about the past year, but Hagi doesn’t answer. Lewis thinks that it’s good for Saya to rest now so that they can fight together again. He asks if Hagi agrees, but Hagi makes it clear that he’ll only do what Saya wishes to do.

Sometime later, Monique brings Saya’s washed and dried clothes back. Monique admires Saya’s beauty and wonders what dreams she is seeing as she touches Saya’s hair. Saya’s eyes fly open, and she instinctively leans out and grabs Monique. Kai tries to calm her down, but Saya wants to know where Hagi is. He enters the room and Monique leaves after giving Saya her clothes back. Kai suggests that she sleep or eat, but Saya gets dressed and leaves the house. She’s stopped at the door by Glay’s dog and then Glay himself. Putting his hand on her head, Glay says that he doesn’t want her to leave with that look on her face and asks her to join them for pancakes. She goes back inside and waits silently for food to be served. Glay looks in the fridge and asks Kai and Saya to go outside to get some eggs even though there is already a big bowl of eggs there (but the two don’t know that).

Saya and Kai visit the hens, but Saya stays silent. Kai tries to get her to touch an egg, but she pulls away and causes him to drop the egg. Kai is reminded of the baseball that got away from Riku back when they were on the Red Shield ship. He thinks that Nahabi will be angry at the egg on the ground and goes on to explain who the other people (Javier, Monique, and Glay) are. He also admits that David is drowning in alcohol because of his depression, but he thinks that David will recover after meeting Saya again. Saya wants to know why Kai is telling her all this because this has nothing to do with her. Kai says that this is a long war and they’ll need to cooperate. However, Saya thinks that Diva is growing ever stronger during this time and tells Kai that he should return to Okinawa. Kai explains that he’s fighting Chiropterans every night so that he can reduce the number of victims. Saya claims that they’re very different in strength, in feelings, in everything. Kai disagrees, saying that they’re the same at least in their feelings – wanting to defeat Diva. Saya feels that that’s impossible for Kai.


David is meanwhile sitting with his back against the shed when he starts throwing up. Hagi approaches him and David comments on how it’s strange that Hagi’s been around in Okinawa, in Russia, on the bloodstained deck of that ship, and now here in the countryside. Hagi senses that David wears a veil of incompatibility, to which David responds that he can’t become familiar with any place. Hagi then asks if David has stopped fighting. Holding up his flask, David says that he’s exchanged his gun for this. Hagi mentions that it doesn’t look like David is enjoying it, so David asks if Hagi is his counselor. Hagi replies that it’s just his impression. He suddenly feels something in the air and says that Saya’s smell was chased by a Chiropteran.

Inside the house, the monster is in the kitchen, but it hasn’t killed anyone. It goes upstairs and sniffs the bed that Saya had been sleeping in. The Chiropteran is ready to hurt Monique, but Kai comes in and starts firing just in time. The Chiropteran pushes Kai aside and runs out, but is met by David and the shotgun. It pins David to the ground, and Kai now can’t get a clean shot with his Igniter bullet. Fortunately, Saya leaps up over the stairway railing and onto the back of the Chiropteran. She stabs it in the back with a kitchen knife and lets her own blood seep into the wound. It throws her off, but she lands on her feet and then stands unmoving as the Chiropteran grabs her from behind. The crystallization soon take effect and kills the monster, though it did manage to cut Saya’s leg first. Glay gives her back her sword, which had fallen between the shelves and the wall. He starts talking about treating her wounds, but watches in amazement as they instantly heal on their own. Saya apologizes and then leaves the house with Hagi.

The two make their way into London where they see an advertisement on a nearby set of televisions promoting a debut concert by Diva. Back at the house, David had opened a package from Joel and is now showing Kai the same thing. Watching the ad on the street, Saya’s eyes turn red. “Diva.”

Retrieved from "https://bloodplusanime.fandom.com/wiki/Episode_34?oldid=12354"
Community content is available under CC-BY-SA unless otherwise noted.