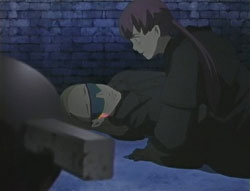 The Schiff are also watching the advertisement for Diva’s concert, wondering what the Chevaliers are up to with her song. Lulu smells Saya nearby, but Moses says that they have nothing to do with her because she wasn’t their hope. Beside him, Darth and Gudriff are also showing signs of the Thorn.

At Glay’s farm, Kai is staring up at the night sky thinking about how Diva stole Riku’s face. Monique comes out, wondering what he’s up to. She asks if Saya is the person Kai likes, but Kai responds that she’s important family to him. The door of the house opens and David steps out, wearing his formal attire again. He’s going to London and will be back tomorrow. Monique thinks that David has changed, to which Kai responds that David is only becoming himself again.

Meanwhile, Saya and Hagi have taken up shelter in a church. Hagi suggests Saya get some rest, but Diva’s song and her Riku-like face are stuck in Saya’s head. Hagi brings over his cello bow, saying that it’s been a long time since she’s played. Saya shakes her head no; the only thing her hand wants is her sword. However, she does want Hagi to play a song for her, and he says that he’ll always play for her.

The Schiff return to their warehouse base and Lulu lights up a lamp, calling it a beacon of hope. Darth comments that it’ll burn out quickly, which garners him a smack on the head from Gudriff. Moses suddenly notices that they’re surrounded by the Corpse Corps. James appears above them saying that they were made with great pains and will be useful until the end – the defective goods will become sandbags. He orders “Terminate” and the soldiers spring into action. Despite the advantage in numbers, the Schiff have a hard time hitting their enemies; Karman and Darth both get impaled. Moses goes for James, but one of the Corpse Corps gets in the way and takes the hit. Moses manages to break off the mask, revealing the face underneath: his own. James explains that this is the Type Moses, chosen from among the prototypes with the ideal genetic information. Improvements were added, making this the perfect Schiff – born to fight. Moses realizes that they, the original Schiff, were used in order to create such a thing. He gets knocked down and the Schiff start taking heavy damage, including Lulu when she tries to help Gudriff. Darth takes her injured body and throws her out of the building. At first Lulu looks like she’s about to cry, but then she remembers something and disappears.

At the church, Hagi has stopped playing his cello and Saya appears to be sleeping. There’s a frantic knocking on the door and the two hear Lulu’s desperate cries for Saya. Hagi opens the door and Lulu collapses inside. When she comes to again, she sees the lamplight and comments that the beacon of hope was such a foolish idea. Lulu then pleads for Saya’s help against the really strong people that Diva’s Chevalier brought. She starts crying as she thinks about everyone dying and the possibility of her being the only one left. Saya stands up, indicating for Lulu to guide her back to the warehouse.

Inside, they find the bodies of Darth and Gudriff, but no James or the Corpse Corps. Gudriff is still conscious, but he doesn’t know what happened to Moses or Karman. When Darth’s body starts to burn from the sunlight, Lulu reaches over to cover up Gudriff, but he asks her to let him die. After the green flames subside, Moses and Karman reappear. Moses says that those two helped them escape with all their might. He looks over at Saya and tries to express his gratitude. She says that it’s unnecessary because she wasn’t able to help them now or then. After Saya and Hagi leave, Karman says that Saya has changed. Moses thinks that Saya probably doesn’t have hope either.

At a museum, James reports back to Amshel about the mission. Amshel says that it’s a joyous day because Diva’s performance is almost upon them and the results of the Delta Plan will soon show themselves. However, he is aware that the hindrance Saya has reappeared. Solomon asks if it isn’t ok for them to just leave Saya alone, but Amshel says that Saya’s blood can kill Diva, so her dangerous existence can not be left alone. Karl wants the job of killing Saya, however Amshel turns to James and gives the task of dealing with Saya to him. Nathan starts teasing James, saying that James’ beloved Mama will be praising him a lot. When James tells him to be quiet, Nathan holds up a pendant necklace which supposedly has a photo of James’ mother that he always keeps with him. James snatches it back and walks off angrily. Karl speaks up again about leaving Saya up to him, but Amshel cuts him off by saying that his words are his brother’s will. They are also the words of Diva. A really pissed of Karl almost turns into his Chiropteran form, but Solomon steps in the way and stops him. On the other side of the room, Diva breaks a display case and takes out a spider specimen that she calls cute.

As day turns to night, the remaining Schiff – Moses, Karman, and Lulu – are burying the weapons of their two fallen comrades. Karman vows to get revenge and knows that Diva and the others are the museum. Moses, however, does not want to go and fight, especially not against the people who have the same face as him. He admits that they were created to be tools of the Chevaliers, but he doesn’t want to meet their expectations and dance for them until the end. Karman says that this regret and sorrow were not created things. He’ll fight for his own sake, and he’ll go alone tonight.

Meanwhile, David has finally arrived at Joel’s home. Joel asks if he wants a drink, but David says that he’s had enough for his entire life. Joel then says that he wants to revive Red Shield – he wants to support those who will fight the Chiropteran. This is the destiny of the one who succeeded Joel’s name and will. He then asks what David will do.

Back at the church, Lulu is trying to convince Saya to fight with them. They share similar goals in the Saya wants to kill Diva and the Schiff want Diva’s blood. Lulu admits that by themselves, the Schiff can’t reach Diva. She also tries to put in a good word for Moses and Karman, but Saya says that she does not need friends. Saya says that this is her own fight – she doesn’t want to mourn or feel sad for anyone else. Not giving up, Lulu tells Saya about how Moses and Karman said that she changed. Lulu doesn’t feel that way because Saya came and helped when Lulu asked her to. She thinks that Saya probably has been through a lot of pain, losing hope. She says that the Schiff have also lost hope, but Karman is still going to fight for his own sadness’ sake. Lulu tells Saya that Diva is at the museum and that they are attacking tonight. Since Saya isn’t responding, Lulu goes to leave. Her final words to Saya asks Saya to remember her because Lulu wants to become someone’s memories.

True to their word, Karman and Lulu arrive outside the museum that night. They are surprised and happy when Moses shows up too. But inside the museum, they find only three Corpse Corps waiting for them. In this battle, they fare even worse than previously, with Karman and Lulu being quickly knocked down and Moses being impaled by all three soldiers at once. When the three Corpse Corps move in for the kill, Lulu blocks one of them and Hagi and Saya handle the other two. With Hagi and Saya’s help, the tide of the battle turns. And with the power of her blood, Saya even manages to crystallize one of the enemies. The other two soldiers then make their escape through the window. Lulu starts to thank Saya, but Moses cuts her off because he knows Saya doesn’t want it. Instead, he promises to go with her to her next battlefield. When Saya says that help is not needed, Moses says that it’s not to help, it’s to entrust their final hope to her. Without answering, Saya turns and leaves, with Hagi trailing behind her.

During this time, at a London subway station, Mao and Okamura meet with David who has a request for them. David points to the Diva poster behind them, saying that he wants them to look into the connections for the sponsors of Diva’s concert. Okamura smiles and agrees to do it.

Retrieved from "https://bloodplusanime.fandom.com/wiki/Episode_35?oldid=9889"
Community content is available under CC-BY-SA unless otherwise noted.