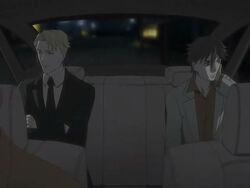 Karl is unhappy that he’s not allowed to go after Saya as Amshel has given the job of destroying Saya to James. Diva and James go to the opera house where Nathan is waiting for them.

David learns from Okamura and Mao about the connection between the performance. They also inform that the Cinq Flèches Pharmacy and the Goldsmith Holdings are connected. There’s a specific link to food business in London, and Okamura produces some photos of the research facility along with a photo of Van Argiano.

David infiltrates the place with a fake ID which Lewis has supplied. He discovers a large tank filled with Corpse Corps soldiers being grown. But he doesn't know that he's being watched by Van Argiano from the cctv cameras. He also finds Julia and she tells him about her research into Riku’s special abilities. They get interrupted by Van who is accompanied by soldiers.

Saya and Hagi attack the opera house sensing the presence of Diva but find no one there. The curtain goes up onstage, revealing that the scenery for the opera mirrors the Goldschmidt estate and ruins that Saya and Diva were raised in. Nathan Mahler introduces himself with his full name, shows that Diva is also here and that James Ironside (who is already in his Chiropteran form) is their opponent for today.

At the research facility, when Van offers David a candy, David grabs Van’s arm and pulls him in, using him as a hostage with a pen. He’s able to make his escape.

Living up to the name of Ironside, James’ armor seems impenetrable, and he’s able to easily handle both Saya and Hagi. Diva leaves because this is boring. Kai, who followed them in, enters the battle and temporarily slows James down by shooting some Igniters onto him. Saya refuses to run away and charges James instead. She can’t break through the armor and James throws her against the far wall. He’s about to stab her, but Nathan stops him. Nathan says that this isn’t the appropriate stage or the suitable scene for the bride to die, and intimidates James into backing off. Nathan leaves, promising to meet Saya on the next stage.

Kai sees Saya close in on Hagi’s neck. She notices him and pauses, but then continues on to bite Hagi’s neck for his blood. Kai and David both return to Lewis’ car and Lewis comments on how the two of them are really alike because their faces show that they has both lost something important.

Retrieved from "https://bloodplusanime.fandom.com/wiki/Episode_36?oldid=12249"
Community content is available under CC-BY-SA unless otherwise noted.