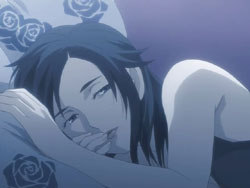 To the Level of Sheer Madness

Many years ago, Diva first made Karl into a Chevalier under the watch of Solomon and Amshel.

In the present, David and Lewis see online that Diva’s concerts have all been cancelled except for the final one. Today is actually Javier’s birthday, for which Lewis and David are baking a cake, and Kai and Monique are out shopping for groceries. Kai doesn’t seem to be paying attention to what Monique is saying, making her wonder if he’s thinking about Saya. He suddenly notices something in the distance and runs off. That something turns out to be Saya herself, looking the concert posters which are now all marked cancelled. Kai is worried about Saya, but she’s fine after having healed. Saya starts to walk away, but Monique runs up and invites Saya to Javier’s birthday party. Much to her delight, Saya agrees to come.

At a US military airstrip, Van is finishing the preparations for the move. However, his assistant alerts him to an abnormality in Zone Z’s luggage compartment. It’s Karl, and he’s opened the container housing the Corpse Corps soldiers. This news is reported to Amshel and Solomon. Those two know that Karl will be going after Saya. Solomon comments that Karl views Saya not only as an enemy, but also as something to live for. Amshel surmises that because of that, Karl can’t kill Saya. Solomon then wonders if Karl should be rescued, but Amshel doesn’t think so.

Back at Glay’s house, Javier’s birthday party is in full swing with lots of familiar guests including even Mao and Okamura. When the dog starts barking, Monique notices that the other guest she invited has arrived. Saya comes in bearing a large gift – a teddy bear for Javier. She turns to leave right after Javier thanks her for it, but Gray stops her, suggesting that she celebrate the birthday with them. Since Monique pulls out a chair for her and Mao also speaks up, Saya ends up staying.

As the party continues, Kai finds Saya standing alone in the kitchen. He recounts memories from Okinawa of their father screwing up at making a cake for Saya’s birthday. Saya remembers that George had made a feast instead. She feels that that those days were like a dreamlike time, but that’s over now. Kai admits that he’s been thinking a lot about why they fight, thinking about Javier and Nahabi’s laughing faces, and wonders if they can return to that. But Saya responds only by saying that she’s a Chiropteran.

Suddenly, Saya hears Karl call out her name. She grabs her sword and runs outside to meet the Phantom, who immediately goes off on a speech about how Saya is like his beautiful goddess, equal to Diva, whose existence brings chaos and destruction to the world. He snaps his fingers and a group of five Corpse Corps soldiers appear. Karl’s plan is to use them to keep everyone else out of the way while only he and Saya dance. Hagi holds off two of the Corpse Corps, while Lulu, Moses, and Karman appear to fight the others. Kai also uses his special Igniter bullets to riddle one with holes and blow him up. One of the Corpse Corps charges right at Kai, but David stops him with a bullet to the head. A second comes out of nowhere, but Lulu is just as quick to tackle him. Kai returns the favor immediately by shooting the soldier right behind her. And when Karman gets double-teamed, it’s Hagi and his cello case that steps in to help.

Meanwhile, Saya has been knocked into the nearby shed by Karl. His voice floats around her, saying how happy he is that it’s just the two of them, with no one interfering, so that she can think only about him – only about killing him. Karl appears behind her, happy that his beloved Saya is in front of his eyes.

Racing towards the farm in his car is Solomon. Earlier, Amshel had asked him if he had remembered the time when Karl became a Chevalier. Solomon recalled that it had not been Karl’s wish to be one. Amshel says that according to Gregory’s theory, Diva’s blood changes everything. The Delta plan was started once Karl was chosen: the seed was sown in Russia, it budded in Germany, and it bore fruit in Vietnam. Amshel had wanted Karl’s body as only experimental material, but Karl had wanted Diva’s love, something that he wasn’t going to get. Remembering Amshel’s words, Solomon speeds up the car.

At that time, Karl is pinning Saya down with a barrage of spikes from his arm. Several of them cut her and one even pierces through her leg. Karl points out his ugly arm to Saya, saying that he accepted it as an offer from Amshel so that he could defeat Saya. He has used to question what a Chevalier was; receiving Diva’s love was his only hope, but Diva had left him. He finally realized that the only person who could understand him was Saya, the enemy. During all this, Saya has pulled the spike from her leg and her blood has dripped down from above onto Karl’s face. Karl suddenly gets riddled with Igniter bullets from Kai. Now in his Chiropteran form, Karl knocks Kai aside and runs out. Saya first makes sure Kai is alright and then goes outside to continue her fight.

Karl suggests that they die together as both Saya and he have been betrayed by their families. The two charge each other, but then Karl grabs Saya from behind. His goal is to kill her by tearing her neck and drinking her blood, which would also kill him. After Karl succeeds in biting down on her neck, Saya hears Kai calling out to her. She slowly realizes that she can’t die here because she has people to defend. In a flash, something cuts off Karl’s left arm, freeing Saya enough so that she can turn her sword and stab herself straight through the stomach. Because he is standing right behind her, her bloodied sword also pierces through Karl. As he crystallizes and dies, Karl turns around and sees that the one who cut off his arm was Solomon.

As Saya struggles with the sword still in her body, Solomon kneels down in front of her. He tells her that if she forcefully tries to take it out, she’ll damage her internal organs. Instead, Solomon does the job of pulling the sword out himself. As Hagi and the others come to Saya’s side, Solomon orders the Corpse Corps back to their beds. When Saya asks him why he helped, Solomon replies that he was envious of Karl – true to himself, living his own life according to his desire. However, Solomon thinks that that was a misunderstanding because Karl was actually just lonely and had figured out that Saya had the same feelings. But Saya and Karl are different because Saya has friends all around her. And yet nonetheless, Saya chose solitude for herself for the sake of her friends. In his own solitude, Karl hadn’t noticed that even after seeing her.

Much to everyone’s surprise, Solomon also reveals that Diva is going to Christina Island in one week. Saya asks him why he’s telling them that, and Solomon replies that he may also be lonely. Then, in a gust of wind, Solomon disappears.

A healed Saya gets back up and takes back her sword. Kai wants to know if she’s going, and of course she is in order to defeat Diva. He reminds her that she’s not fighting alone, that this is also their fight. What’s more, he wants to protect her. Saya gasps after hearing this. She starts to say something then stops herself. In the end, all she can do is call Kai an idiot.

Retrieved from "https://bloodplusanime.fandom.com/wiki/Episode_37?oldid=9891"
Community content is available under CC-BY-SA unless otherwise noted.