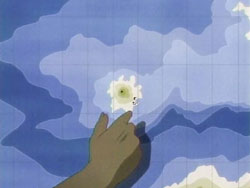 On Christina Island, news of Karl’s death has reached Diva and her Chevaliers. When James promises to protect Diva and kneels down to kiss her hand, he sees that she’s transformed back to her original body. Saya, meanwhile, is sitting at a dock staring at the ocean and thinking about what Solomon had said about her having companions. However, Saya still feels that she is by herself and tells Hagi that this is their fight. She doesn’t want anyone else to be hurt – not Kai, not David, not even Hagi. Kai arrives by car and gives her a basket from Javier. He’s actually here to tell her that Joel has made preparations for them to go to Christina Island by ship. Inside the basket, Saya finds a note from Javier asking her to come by and play again. Saya wonders to herself why everyone is so concerned about her.

That night, the three remaining Shifu are waiting for Saya to arrive on the boat. Karman says that if Saya doesn’t come, they can go themselves to face the Chevalier and the Corpse Corps. He and Lulu think Corpse Corps lack the battle experience and individuality that the Shifu possess, but Moses points out that the enemy’s numbers could turn it into a relentless fight. Karman doesn’t care and grows impatient with waiting for the humans who are currently in a conference. In one of the ship’s cabins, Lewis is explaining the layout of Christina Island. The island was abandoned after the fishing there died out. Now, the government uses the island to store nuclear waste underground. Okamura explains that the promotional video (music) company got permission from the government to use that island and that shooting begins tomorrow. David says that even if it’s a trap, they have to bet on the small possibility.

Just as everyone is staring at the clock, Lulu bursts into the room to announce that Saya is here. All of them go outside to meet her as she boards the ship. Seeing how Saya can’t look at them directly, Mao tells her to shape up because everyone was waiting for her. Saya spots David and asks him to take her to Diva, but she also says that afterwards, she’ll handle things herself. David tells her that they are here to support her. That doesn’t change even if Red Shield is no more – they will still be her shield. Okamura and Mao decide to take their leave now so that they can return to Glay’s house. Saya wants them to apologize for her to Glay and everyone, but Mao tells Saya to say it herself when she comes back. Okamura agrees and even asks for an interview once she comes back. The ship arrives near the island and the group makes an amphibious landing through inflatable rafts. Surveying the landscape, Kai notices that there is light coming from building at the top of the hill. The three Shifu decide that it’s easier for them if they move by themselves. They take off and come to a part of the island heavily guarded by the Corpse Corps. Just as Moses says that it’s their duty to bury the Corpse Corps, the enemy strikes. With some teamwork, the Shifu are able to handle the first attacks from the five Corpse Corps. As they are fighting, the main group is approaching the house at the top of the hill. Hagi suddenly senses something and shields Saya with his cello from a projectile. Kai recognizes that the person standing in front of them now – James – is the same Chevalier from Covent Garden.

David immediately tries to hit James with a bullet, but James instantly changes into a Chiropteran form. James tells Saya that she’ll die here today. She is the only one in the world whose blood can kill Diva, and so by defeating her, the safety of Diva and her Chevalier is guaranteed. Saya rushes in and tries to hit James, but the Chevalier’s armor is still too tough. When she tries to strike low at his feet, James quickly blocks with his arm. He grabs hold onto Saya’s sword until Hagi smashes into him with the cello case. James knows that Saya is working with the Shifu, but he calls them all amateurs who don’t know how to fight. Having seen enough, Kai asks for some cover fire from Lewis and David because he’s moving up to Saya’s position. James continues talking, saying that Saya’s grave will be the nuclear waste pit.

Kai shoots James, diverting his attention and allowing Hagi to grab Saya out from in front of James. Lewis then pelts the enemy Chevalier with a barrage of machine gun fire. Kai tells Saya that, like James says, it’s impossible for them to defeat James by themselves. But Kai has a plan and asks Saya to lend him Hagi. For now, Saya will have to keep James busy with just David and Lewis’ help. Meanwhile, the Shifu are holding up against the Corpse Corps’ superior numbers, but Lulu and Karman lose sight of Moses. Moses is actually fighting three Corpse Corp by himself, and is getting slowly defeated. After hitting Moses twice, one of the Corpse Corp comes in for a killing blow, but a cello case flies out and flattens his skull against the nearby wall. Kai is also here, and has a request for Moses and the Shifu. Moses says that they should talk afterwards, referring to the fact that the Corpse Corp have gotten back up on their feet.

Solomon returns to base where Amshel is waiting. Amshel tells Solomon about how Saya and company have gone to Christina Island. Solomon remarks that that’s where Diva has gone to have her promotional video shoot, but then he notices that there’s someone standing in the corner – none other than Diva herself. Back on the island, Saya is actually holding her own fairly well against James with a bit of help from Lewis and David; neither side is able to hurt the other. James, however, corners her so that her back is against the deep pit. It is at this point that Kai shows up and once again distracts James. The three Shifu then appear above the Chevalier and dig their weapons into his body. Hagi comes in and clings to James’ left arm, ripping off the armor plating even though James manages to impale Hagi. The lack of plating leaves James open to Saya’s bloodied sword.

James loses an arm to the crystallization effects, but he grabs Saya and runs toward the nuclear waste pit. She stabs him in the right leg, causing him to lose that leg, but by now James has jumped into the pit. Kai reaches out and grabs Saya’s outstretched arm, but he gets pulled in too. A flash of light can be seen going into the pit. James recognizes that the Chiropteran who flew in is actually Solomon. After saying goodbye to him, Solomon slices off James’ remaining arm – the one holding Saya. He carries Saya and Kai on his back and flies back up, having saved them. With the battle over, Solomon reveals that by the time Saya and her friends came, Diva had already left the island. Solomon realized that it was his brother’s plan for him to reveal the information to Saya. The name of that brother is Amshel Goldsmith, a statement that elicits gasps from Lewis and David.

Back at their castle, Diva is asking Amshel if James will be ok. Rather than answering her, he tells her about how Nathan will come and take her to New York. As for Amshel himself, he’ll come later. Solomon is actually telling Saya and friends the same information about Diva going to New York. He then gets ready to leave, but Saya stops him and asks him why he’s helping them even though he’s the enemy. When Solomon suggests that it’s because he loves her, Hagi steps in between the two of them. Seeing Hagi’s glare, Solomon proclaims that he is one of Saya’s allies and does not want to compete with Hagi. He then disappears. Kai collapses soon after from pain. He tries to downplay the injury, saying that it’s nothing compared to Saya’s wound – the wound that doesn’t heal. Kai says that he will become the bandage that covers her wounds. Saya can only look back at him without saying anything.

Retrieved from "https://bloodplusanime.fandom.com/wiki/Episode_38?oldid=9893"
Community content is available under CC-BY-SA unless otherwise noted.