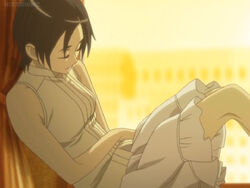 All the parties have arrived in the United States; Diva is singing her song at a countryside home while Saya and company are staying in New York City. Though she’s sleeping, Saya’s mind is on the promise she made with Hagi about when everything is over. Hagi sees the tear forming in Saya’s closed eyes and wipes it away. He puts his hand on hers, but when she wakes up, he takes it off. Hagi tells her that everyone else is off searching for an apartment that they can make their base. When Saya tries to get out of bed, she stumbles right into him. He asks her if she’s ok, and she replies that she’s cold and that she’s going to take a hot shower. Meanwhile, Diva is still singing her song at the estate. She suddenly stops and approaches Nathan to take a bite of his neck so that she can suck some of his blood. Nathan comments on how good it feels, how this is supreme bliss. Just as he thinks that she’s about to suck him dry, Diva pulls away and continues with her song. As Amshel walks up, Nathan says that Diva’s tension has been high recently and he wonders how the other queen is getting along.

At that time, Saya is getting another blood transfusion in her apartment. Hagi brings her some cold water and asks her what she’s been doing. Saya replies that she’s been watching the city and thinking about how it’s full of people who don’t know about Diva, about the Chiropterans, or about them. For a long time, no one has known the things they’ve been doing, nor will anyone know when it ends. Hagi says that this is the will that she and Joel chose to take over. Saya then apologizes to Hagi because if she hadn’t made him a Chevalier, he wouldn’t have had to become like this. Hagi replies that he doesn’t regret becoming a Chevalier and reminds her that she was the one who once said that she wanted to travel the word with sword in hand together with him. These words supported Hagi when he was lonely – he knew that he was not alone. That’s why now he is still with her. As he was saying all this, Saya had tried to stand up and now clings tightly to his clothes, with her head against his chest. She thanks him for his words.

Back at the countryside, Diva is still prancing around. Nathan brings some wine over and comments on how Amshel is like a father as he watches over Diva. Amshel says that he is her admirer with only one person who worships her more. Looking forward to the moment when she shines on the stage, that person is Nathan. Nathan replies that he only wants to hear Diva sing her best on the greatest stage. He does have a question for Amshel though: what is Amshel’s desire? Amshel answers that whatever Diva wishes for, he also wishes for. Nathan thinks that if that’s the case, then Amshel should have brought Saya’s Chevalier in front of Diva sooner. Amshel says that if Diva had wished for it, it would have been so. But Diva did not choose that Chevalier. Amshel explains that everything he does is for the sake of Diva’s happiness and that won’t change. He’ll remove any hindrances, causing Nathan to wonder if that’s Solomon. As if on cue, Solomon is approaching Diva in the woods nearby. He kneels down and apologizes to Diva for not contacting her. When Amshel asks him what he’s up to this time, Solomon says that he’s here to talk to Diva about the distant past and the future in front of them.

Solomon asks Diva if she still remembers when she first met him. Diva does indeed, saying that Solomon was wearing white clothes. Solomon explains that when World War I was about to end, he had started working as a doctor. With his elder brother, Solomon had met Diva in the basement of a castle, lying on the floor naked with the empty cocoon nearby. Amshel had cut his hand and allowed Diva to drink from it, explaining to Solomon that Diva was his treasure, his most important thing. As Amshel pulled himself away, it was apparent that Diva wanted more blood. Amshel walked over to Solomon, saying that the human Solomon Goldsmith died here today. By receiving the blood of Diva, they would become connected by blood and be a true family. Solomon thought that this will allow him to approach his ideal. Amshel then plunged a sword into Solomon’s chest, and Solomon’s blood quickly formed into a pool beneath their feet.

Back in the present, Solomon continues on by saying that that’s when he became Diva’s Chevalier. He thought that this would free him from his karma, the karma by which man kills each other. With the war over, he thought that peace would come. But he had become a Chevalier, granted with eternal life, and so he saw humans as diminutive. He now saw karma from mankind’s values as worthless and saw humans as stupid and ugly living things. Liberating the world from that filled him with joy and for the first time, Solomon was happy. But there is still strife in the world, and that is in Diva and Saya’s fight. When Diva replies that the one who wants to fight is Saya, Solomon says that he cannot consider her the enemy. Diva protests that Saya is trying to kill her and then changes to her old appearance. She confronts Solomon about liking Saya, to which he declares that he loves Saya and wants for her to live. Diva wonders if he wants that even if it meant Diva were to get killed. Still, she doesn’t think that Saya will be able to kill her. She claims that she wants to get along with Saya, but that she wants to kill Saya even more.

Diva tells Solomon that he can do what he likes, but from today on, he’s no longer her Chevalier. The one who’s gone off the road is Solomon. Before she goes back into the house, Diva leaves Solomon with a few words. No matter how much he struggles, he cannot become Saya’s Chevalier. Diva jokes that they can go make some children and then runs off. With Diva gone, Amshel is ready to kill Solomon. Even though Solomon says that only Saya’s blood can kill them, Amshel wants to try anyway. Solomon lunges forward, but a psychic blast by Anschel immediately severs his sword arm. After reattaching his arm, Solomon and Amshel start seriously going at it, destroying the landscape in the process. But Nathan stops them both before they can hit each other. This is Nathan’s home and if they fight on and destroy it, there’ll be no place to live. And then there’s the matter of James, who’s still alive inside the house in a tank that Diva is now sleeping against.

Withdrawing, Amshel tells Solomon that it is the Chevalier blood inside of him that wants Saya. Solomon counters back that it’s their instinct to also love Diva. His yearning feelings for Diva haven’t changed and he’s proud to be Diva’s Chevalier. But Solomon also knows that he is himself, he is Solomon Goldsmith, and so he’ll be going to Saya. Amshel thinks that if Saya becomes Solomon’s, then Solomon will kill her even before the other Chevalier do. Back at the city apartment, Saya sleeps through the evening resting on the windowsill. Hagi leans down towards her and hears her mutter something about eating, causing him to smile a little. Kai then comes back complaining about how he didn’t think David would choose such a crumbling apartment. He says that they’re going to be moving tomorrow, but for now he’s brought some dinner. Kai sees that Saya is sleeping and tries to wake her up, but Hagi stops him because Saya needs rest. Hagi wants to let her forget the fighting and have some happy times. Having said that, he leaves with his instrument case. As the night goes on and both Diva and Saya continue to sleep, Hagi plays his cello from on top of the Chrysler Building.

Retrieved from "https://bloodplusanime.fandom.com/wiki/Episode_40?oldid=9895"
Community content is available under CC-BY-SA unless otherwise noted.