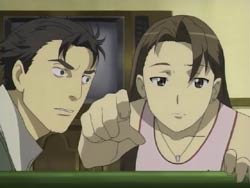 The Place Where I Belong

Mao is at the airport buying a first-class airplane ticket back to Japan for next week. She then calls up Okamura right as he’s getting back to their apartment and asks him to come to the airport to get her. Okamura dumps the ramen cups he bought outside his door and exits the building, just as it explodes. One of the now-burning ramen cups tumbles down to his feet. Later, at David’s apartment, Mao explains that there was a gas leak that caused the explosion. She’s surprised to see that Lewis and David are soaking their feet in ice water, but that’s actually because the air conditioner is broken. After David reveals that Diva will be giving a performance at the Metropolitan Opera House in September, Mao asks what Saya is up to. According to Kai, she’s actually still sleeping and hasn’t been feeling well recently. Mao makes a snide comment about how this is an all male household and then goes to see Saya. She finds Saya awake already, with Hagi by her side. Mao kicks Hagi out and then opens up the drapes to let some light into the room.

Back in the living room, Okamura explains that the real reason his room got blown up was because he posted the photographs he took of the attempted assassination of Amshel onto the Internet. The people troubled by such photographs were most likely the pair sitting the background behind Amshel, the people who part of the plot. David decides that they should try to dig up information on the person who ordered the assassination. Elsewhere, Van Argiano is celebrating his promotion to CEO with Collins. Julia comes in wanting to speak with Collins, but he just leaves all the work to her. Amshel also enters the room, requesting an urgent examination for Diva. To Collin’s surprise, Amshel asks Julia to be the doctor in charge for Diva. When Collins protests, Amshel reminds him that his original work was on the research and development of the Corpse Corps. He tells Collins to work hard and then leads Julia away. Meanwhile, Mao has cooked up a rather burnt breakfast for Saya. To Mao’s relief though, Saya still finds it delicious. Mao’s actually been in contact with back home and shows Saya a photograph of her father’s new baby, Mao’s new little sister. Saya finds the baby cute, and Mao says that Saya can see the baby when she returns to Okinawa. Saya thinks for a bit, and then says that she felt that Mao would be a scarier person. Mao reminds her that she’s the one fighting monsters with her sword, which causes Saya to laugh. She starts to get nostalgic about Okinawa, wondering about the heat and how Kaori is doing. Mao says that Saya can return to Okinawa once all this ends and meet Kaori again. She also invites Saya to go out shopping once they go back. With a hint of sadness in her voice, Saya agrees to do that once this is all over.

Afterwards, Mao finds herself standing alone by the stairwell, staring at her plane ticket. Kai and Lewis find her their on their way out to meet a friend of Lewis’. Mao seems depressed over how everyone is working hard to support Saya, so Lewis leaves her and Kai to talk. She feels bad about how everyone is working hard except for her since she can’t do anything to help. Kai says that he’s same way, though Mao thinks that it’s different for her. She asks Kai if he could accompany her again later so that she’ll feel better and he agrees. Clutching her ticket, Mao is on the verge of crying. Kai joins back up with Lewis at a diner to meet his friend. This woman refers to Lewis as Sammy at first. She agrees to call him Lewis, but comments that he’s gotten fat. Okamura has a good laugh about that once Lewis and Kai get back to the apartment.

The woman had told Lewis about a newly established special force, how the Goldsmith company is pulling the strings, and how Grant (who Okamura identifies as the current Secretary of Defense) is connected. Lewis still has connections in the CIA and jokes how even the apple pie he’s eating is on the national budget. When Kai wonders if they can trust this information, Lewis explains that the Army and the CIA don’t necessarily have mutual interests and sometimes it’s in their interest to leak information about the other side. At that time, Joel is meeting with an old retired general. He asks about the newly established special force, but the general feels that it’s better if Joel doesn’t know. Since Joel brought up such a suspicious topic, the general comments that the opera is more suited for him. He tells Joel about the debut of a singer named Diva coming in the fall. She’ll be at to a festival on a North Carolina base. The general thinks that it’s a bit presumptuous for her to call herself Diva and comments that Maria Callas should be the only one worthy of such a name. He asks if Joel is interested and of course Joel is.

Under the watch of Amshel, Julia has discovered that Diva is pregnant with not one, but two babies. Although she had read about the accounts in Joel’s Diary about Saya and Diva’s mother, she’s confused about why two queens would be born in a vertically structured society where the queen is on top. And not to mention the fact that the two’s blood will be poisonous to each other. Amshel tells her that the Hypothesis About The Reproduction Of Chiropteran is quite an interesting report, but there is no actual proof. The answer is in front of their eyes – Diva and Saya’s Chevalier’s children. That Chevalier is of course Riku. Amshel goes on to explain that the theme of the queen of the Chiropterans giving birth has been tested several times in the past, but nothing worked. However, now another queen’s Chevalier will be crossed with Diva, and they are successful.

Before long, Diva will produce two queens and those queens will make Chevaliers. Even more queens will then be conceived and eventually the world will be filled with Chiropterans. Amshel takes great delight in thinking that a new generation will soon be upon them with new unknown living things. He still remembers how happy he was discovering the unknown living thing that was a Chiropteran way back then. For a brief moment, Julia sees Amshel transform into Elizabeth, but just as quickly he’s back in his normal appearance. She realizes that he’s a Chevalier, and asks if he thought that she’d kill Diva. Amshel considers that a silly question because he knows she can’t do it. She’s the same as him, a seeker of the truth. During all this, a furious Collins has been ripping apart his own office in anger.

At the apartment, Kai learns from David that Diva will be singing at an Air Force base. Okamura thinks it’s a trap, but they’re of course going anyway. Mao brings them some coffee and David gets the first taste of it; he calls it a very unique coffee. Mao also brings a cup to Saya’s room and hears Saya telling Hagi not to say anything about something that’s coming soon. Since Mao interrupts them after having overheard the conversation, Saya tells her about the 30 year sleep cycle. Saya doesn’t know the reason, but she can only live as a normal person for two or three years before having to sleep for the 30 years. When Mao wants to know why she doesn’t want to tell everyone that the time is coming, Saya can only apologize. Mao asks her if everything they talked about earlier about going back to Okinawa and meeting her new little sister was all a lie. Saya is about to say sorry again, but Mao slaps her first.

Mao admonishes Saya for burdening everything on herself, trying to solve everything by herself while Kai and everyone else is doing so much for her sake. Saya says that that’s the reason she doesn’t want everyone else to know. Seeing the determination in Saya’s eyes, Mao agrees not to tell anyone. Instead, Mao has come to the decision that she’s not going back to Okinawa until after everyone is done fighting. And what’s more, she makes Saya promise to do the same – return to Okinawa together with her and Kai. The two pinky swear on the promise and Mao leaves the room. Outside, Hagi bows to her. Mao ends up tearing up her plane ticket and throwing the pieces out the window with a smile on her face. But then she goes to taste her own coffee…and immediately spits it back out.

Retrieved from "https://bloodplusanime.fandom.com/wiki/Episode_41?oldid=12143"
Community content is available under CC-BY-SA unless otherwise noted.