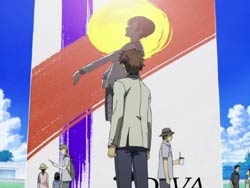 Amshel asks Diva, who is sitting in her completely trashed room, what she truly desires. Diva points to a picture of Kai – that’s who she wants. Sometime later, at the American Air Force base, there is an air of festivity as crowds of people enjoy the food and the airplanes buzzing overhead. Erected on the grounds is a giant poster of Diva that Kai is staring at. His frustration stems from David telling him not to lay a hand on Diva if she appears in front of him. David feels that they can’t do anything; the only person who can stop Diva is Saya. And since Saya’s physical condition right now hasn’t returned to normal, they can’t go out recklessly fighting. Kai understands that, but every time he sees Diva or hears her voice, the Riku inside of him cries. In front of the stage, Mao and Okamura are reading a flyer for the concert, which includes a picture of Nathan the producer. Mao understands their situation better, but she still feels that she can’t do anything. Saya meanwhile is following Hagi around the base when she suddenly gets dizzy and collapses. He catches her and takes her to rest on a bench until the time comes. When he sits down beside her and reaches over to brush her hair off her face, Saya takes his hand – she likes the cold feeling of it.

During this time, David has been sneaking around the base disguised in a uniform. Over the phone he tells Lewis that although Diva is pretty much in front of them now, they can’t move carelessly without knowing her objective. David is about to hang up but Lewis has one more request: the American military’s steak and grilled burgers.

Just then, David notices Julia entering a building nearby, with Collins following her. Collins hides a gun in his pocket before entering the building too. Inside, Julia has done an ultrasound on Diva. Julia calls them “embryos,” but Diva insists on calling them “babies.” David overhears all this from outside the window and continues listening as Julia explains that in terms of a human pregnancy, this would be about the eighth week. Diva, however, thinks that the babies will be born soon, much to Julia’s dismay. After Amshel leads Diva out, Julia breaths a sigh of relief and reaches for her cigarettes. Just as she’s trying to flick her lighter on, Collins appears behind her. He asks what her plan is and Julia responds that she doesn’t want to know everything about the Chiropterans. She also has no desire to go public with what Collins calls the “discovery of the century.” He asks her about her duty as a scientist and talks about how the truth is the truth recognized by everyone. Collins feels that there’s an obligation to inform everyone of the truth of the Chiropterans. When Julia asks him if it’s for the sake of prestige and admiration, Collins explains his desire to leave his name behind in history. Julia tells him that the Chiropterans are dangerous and that it’s still possible to turn back now. In a crazed tone of voice, Collins asks where they who led to the destruction of Red Shield can turn back to.

As evening nears, more and more of a certain type of candy bar are being handed out on the airbase to all the visitors. In her trailer, Diva tells Nathan and Amshel that Kai will be coming later. Her blood whispers it – the blood of Riku inside of her. Amshel then steps out of the trailer and disappears. In the distance, Van Argiano is standing on a cliff with a trio of helicopters and a Corpse Corps force. Right before he sets out, Van says that it’s the start of the show. Diva’s performance is also about to start, but first Amshel pays a visit to Kai. Because Diva desires it, Amshel invites Kai to go see Diva. With little choice, Kai gets taken to her trailer. She tells him that she wanted to meet him, but notices that he’s not very happy. Kai of course still remembers how Diva killed Riku. Hearing this, Diva tells him that Riku is still living. When he gets angry because he thinks she just stole Riku’s appearance, she walks over and places his hand on her abdomen. That’s where the babies are – her and Riku’s babies. Kai remembers what happened way back when Diva stripped in front of Riku and had her way with him. As Kai continues to stare in amazement, Diva reaches out to him, but she gets interrupted by Nathan because it’s time for her to go on stage. As Nathan fusses over her, she tells him that she’s going to be singing for Kai today. Kai says that he doesn’t need it, prompting Diva to call him obstinate.

A large crowd has gathered to hear Diva’s performance. Kai and her two Chevaliers watch from the sidelines as her song fills the air. The song even reaches Collins and Julia; Collins says that his “fifth base” is singing. In a calm manner, he then pulls out his gun and points it at Julia. If she’s gone, they’ll have no choice but to rely on him. Julia thinks that Diva and the Chevaliers wouldn’t choose him even if she were dead because they are pure. Collins loses his composure and yells for her to be quiet. Meanwhile, Diva’s finished her song and the crowd cheers heartily for her. Afterwards, Nathan calls it perfect, but Kai responds coldly. Diva decides that pressuring him is useless. Amshel utters her name in a cautionary tone, causing Diva to say that she understands and that she’ll reserve it for a special day. And on that special day, she wants Kai to be at her side as her Chevalier. Together with Amshel and Nathan, doesn’t he want to protect her babies? In fact, Diva says that if he became her Chevalier, he could make children with Saya. All of this pisses Kai off enough that he pulls out and points his gun at Diva. She puts her hand on it and tells him that it’s ok if he shoots. By squeezing the trigger and drinking her blood, he can be together with her. She makes her final plea in Riku’s voice. Kai is at first caught up in Riku’s voice and expression, but then steels his face. A gunshot rings through the grounds.

That gunshot actually came from Collins’ gun. And the person who got shot wasn’t Julia, it was David protecting her. After Collins runs out of the room screaming because he now has a knife stuck in his right arm, Julia rushes over to David and sees that the bullet hit him in the gut. Talking slowly and in pain, David says that he’s glad she’s safe and that everyone is waiting for her. With that, he collapses onto the ground. Back at the other showdown, Diva urges Kai to hurry up and shoot. Kai lowers his gun, refusing to become her Chevalier because he knows that Riku wouldn’t want him to be. Diva gets angry and decides to eat him instead. But before she can make a move towards him, Saya flies in. Diva jumps away and tells Nathan and Amshel that just as she thought, Kai is Saya’s precious prince. Saya tries to rush Diva, but Amshel stops her in her tracks. He twists her arm around and digs his claw into it, causing her to drop her sword. Hagi then charges into the battle, but he is met by Nathan who smacks him around and is easily able to dodge all his attacks. Nathan restrains Hagi by putting him into a neck hold, just like the one Amshel currently has Saya in. Diva decides to let Amshel kill Saya with Kai watching on. Kai tries to stop them by shooting his gun, but Amshel easily catches the bullet in his hand.

This battle is interrupted by a scream from the crowd of people who had been Diva’s audience. Several of them have turned into Chiropterans, all of whom had been eating the candy bars. Okamura starts shooting pictures as the security guards try to stop the monsters. The flash of his camera catches the eye of one of the Chiropterans, but suddenly a Corpse Corps soldier falls out of the sky and impales the monster’s head. They are of course being dropped off by Van’s helicopters. Van’s assistant is filming all of this which is being sent to the Pentagon. Van himself thinks that this is indeed a wonderful demonstration. Watching the scene from behind the curtain on the stage, Diva laughs happily. She then gives Amshel another go ahead to kill Saya. As he crushes his neck in his hold, Amshel finds it regrettable that he has to deprive the light of those beautiful pupils. Soon after Saya blacks out, a dagger aimed for Diva comes flying out of nowhere. Amshel intercepts it with his hand, letting go of Saya in the process. Before she can fall to the ground, Solomon arrives and catches her. Amshel asks Solomon if he’s now pointing his blade at Diva in addition to leaving her. Solomon replies that this is the way of life that he chose: he wants to live together with Saya. That’s his only desire. He says goodbye to both Diva and Amshel and then flies off in the night sky carrying Saya’s body. Amshel asks Diva if he should give chase, but she says that it’s ok because she’s drained from hearing everyone talk about Saya. She wants to go home now, feeling that it’s still ok because she has her children. During this, Hagi has been surprising Nathan with his strength. He manages to break free and then kicks Nathan into one of the trailers. Once Diva and her Chevaliers leave, Hagi decides that he’s going to chase after Solomon. Kai thinks that the idea is absurd, but Hagi says that the only person he has is Saya. And with that, Hagi runs off in the direction Solomon that was headed.

Retrieved from "https://bloodplusanime.fandom.com/wiki/Episode_42?oldid=9897"
Community content is available under CC-BY-SA unless otherwise noted.