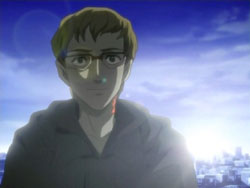 In their New York apartment, Julia is explaining what she knows about Diva’s children to the others. If Amshel’s words are truth, these are her and Riku’s children. Lewis suggests that the babies will be in Diva’s stomach for at least another year, but Julia says that the birth could be tomorrow or it could be in ten years. They’re talking about Chiropterans, so they can’t really guess on when. Lewis thinks that the number of enemies will increase if Diva gives birth, and Saya vows to kill Diva before then. The topic of the conversation then turns to David. According to Julia, David has to spend another half a month in bed because of his injuries. It’s at this point that Saya notices that Lulu has silently appeared and is sitting on the windowsill beside Julia. Lulu and Saya talk about Okinawa, and Lulu says that the Khirbet where she was born was a cold place with only ice and rocks. Lulu then asks about where Hagi was born, and guesses that it was in a castle. Hagi reveals that it wasn’t a castle, but rather he was born among travelers.

Lulu then notices that it’s 7PM, which means it’s time for TV. As she watches TV happily, Lewis comments to Julia that Lulu seems to be coming here secretly, without telling the other Schiff. Kai, who has walked in with a bag, says that the Schiff aren’t their enemies anymore and that Lulu isn’t restricted. Julia, however, is surprised that the Schiff are still alive. She explains that the Schiff were created in the process of trying artificially to produce Chevaliers. It wasn’t intended that their lives would have limits, so in that sense they are failed creations. And these demerits were used thus to create the Corpse Corps. The difference between the two groups is that the uncertain appearance of the Thorn can be controlled in the Corpse Corps with the presence of Diva’s blood. The D-base in Diva’s blood was used for both the Delta Series and the genetic remodeling of the Shifu. Kai wonders if Saya’s blood would be any good, but Julia says that she would need time and effort to look into it. The problem is whether or not the Shifu’s bodies would hold out until then.

The bag that Kai walked in with earlier is actually filled with packets of blood. After examining it, Kai leaves again and meets with Moses in front of the Metropolitan Museum of Art. Moses takes the bag of blood packets and apologizes for troubling Kai, but Kai is used to it because of Hagi and Saya. Moses knows about Lulu going over to their apartment, and says that Lulu hasn’t forgotten what needs to be done. However, she’s desperate to live for now, so Moses asks Kai to pardon her. Of course Kai doesn’t mind, especially since their two groups understand each other after so long. Moses smiles and gives Kai his gratitude. It is thanks to Kai that they are alive. If he did not try to understand them through Irene, they would not be here today. The name Irene conjures memories in Kai of the girl who he befriended, and Kai wishes that he could have met her earlier. Moses says that if there was a man like Kai at Khirbet, then their way of life might have changed too. The next time Moses is born, he wants to be born at Kai’s side. Kai grabs Moses angrily because he feels Moses shouldn’t be talking like that when he is still alive. However, Moses tells Kai that the Shifu are limited – if the Thorn’s appearance is not stopped, they cannot help but fear the death that gnaws away at them. And so, while they still have life, they have to defeat Diva. Moses then promises that if they learn anything about Diva, they’ll report it. As Moses is walking away, Kai stops him by saying that his group does know something and it wouldn’t be fair not to share.

Lulu meanwhile has returned to the abandoned apartment where she, Moses, and Karman have taken up residence. Only Karman is there when she goes in and he immediately asks where she went. He can tell that she’s been to Kai’s place because of the smell on her. Karman tells her not to go anymore, but Lulu protests because everyone is so kind and the TV is so interesting. Lulu suggests that they go together next time, but Karman answers her by throwing his weapon at her. Karman doesn’t want her to go to the human’s place because they are different from the Shifu, because the humans won’t develop Thorn. They three are the only ones who are Shifu. It is at this point that Moses comes back with the bag of blood packets, and Karman figures out that Moses also met with Kai. Moses says that Kai is trustworthy and is cooperating with them. As long as Kai and company supply the Shifu with blood, the Shifu had decided to stop hurting people. Moses believes that they can live with man, but Karman doesn’t want man’s charity – he can get his own food. He knows that all humans are not like Kai and friends.

Lulu starts sucking on one of the blood packets that she considers delicious and remembers to tell Moses that she now has a place that she wants to go: Okinawa. She describes the place happily and says that once everything is over, Kai will be returning there. That’s why when that time comes, she wants the Shifu to go together with him. Karman cuts her off and tells her that it won’t happen. Even if they obtain their dream, they would only get hurt. After thinking for a bit, Lulu announces that recently she’s been thinking that they won’t die and the Thorn won’t develop for them. Karman angrily rushes over, grabs her, and reminds her of all their friends who have died of the Thorn. In doing so, his hood has come off, exposing his neck where it is apparent that the Thorn has started to grow. Without saying anything else, Karman covers himself up and leaves. Lulu chases after him, but she doesn’t see which way he went and goes in the wrong direction. Outside their building, a familiar face has appeared – James.

With the sun coming up, Lulu is still unable to find Karman, so she heads for Kai’s apartment. There, Saya is telling Kai about how it feels like nothing has changed in her, him, or the Shifu with their talking and watching TV. Kai says that by understanding each other, they can become friends with anyone. Saya feels that Kai is becoming like their father and says that he’s amazing because he tries to understand the enemy whereas she can only fight. Kai responds by saying that she does what only she can do, and that he is only able to do his thing because he believes in his friends. Suddenly, there is a banging on their window, and Lulu enters the apartment, begging them to help her look for Karman. During this time, Karman is somewhere in an alley, on the run from the sun. In his mind, he addresses Irene and tells her that he’s scared of dying. He wonders why this frightens him so much and realizes that he doesn’t understand the meaning of living.

With the sun peering into this alley, Karman flees to the shade inside of a hospital. He sees a woman walking towards him and so he bares his fangs. As she tries to run away, he catches her and almost bites her neck. However, Karman notices that there is a person standing in the light at the end of the hallway: Irene. And it’s not just her, it’s all of the Shifu who have died so far. Karman starts to walk towards them, but they disappear one by one, just like how they appeared. Irene shakes her head at Karman before she also vanishes. Karman then sees that there is a basket of flowers outside where everyone was standing, but that basket is sitting in the sun, and so it is out of his reach. Realizing that everyone was here, Karman falls to his knees. Meanwhile, Moses is back at their deserted apartment thinking about what Kai had told him earlier about the cure for the Thorn through the blood of Diva. Kai had warned that it was a possibility and that he didn’t know for sure if it would save them. He had also invited the Shifu over so that Julia could get a look at them and maybe figure something out. It is Kai’s feelings that they are friends now.

Just as Moses is saying the word “friends” to himself, James appears and asks him if it’s ok that he’s not looking for his friend. Moses immediately grabs his weapon and goes for James’ head, but James blocks the blade with a spike from his hand. Just like Karl’s, this hand also has the capability of shooting the spikes. James confirms that it is a Shifu hand and feels that it’s not bad. Moses thinks that James should have died on that island, but James explains that he was saved before Saya’s blood could travel through his entire body. He rips open his shirt to reveal the lines where his old body ends and his new body begins. Their bodies were born from Diva’s blood and now James has obtained eternal life again. James then identifies the Thorn as the mark of death that eats away at the Shifu. However, with Diva’s blood, maybe the Thorn can be erased. When Moses asks him what he’s basing this on, James says that the proof is that he’s alive. If Moses wants to save his friend, he should come to James’ place. Moses responds by saying that he has no intention of bowing his head to them. James in turn says that the Thorn cannot be erased with pride. If Moses wants to know a way to live, he just needs to come along.

As night falls again, everyone returns to Kai’s apartment having had no luck at finding Karman. Lulu asks everyone to keep searching because she doesn’t want Karman to die alone by himself. Kai tells her that they’re not giving up and that they’re going out to look again. He considers the Shifu to be friends who they have entrusted their lives with, not strangers. As everyone is leaving, Lulu tells them all “Thank You.” Back at the Shifu apartment, Moses walks in and finds Karman’s weapon leaning against the wall. Moses eventually finds Karman on the rooftop alone. His look of anger gone, Karman tells Moses that he saw Irene. And it wasn’t just Irene, it was Guy and everyone else too – they were all inside of him, inside his memories. He says that dying is scary, but he doesn’t know why it’s scary. Not being able to do anything about dying, that might have been scary, but in truth that’s not it. Like Irene said, what’s scary is dying without becoming someone’s memories. However, he realized that all of his friends were alive inside of his memories. Karman says that he has only Moses and Lulu, and so he asks Moses now to remember him. He is really glad that he was able to meet Moses. With the sun coming up rapidly, Moses grabs Karman and shields him from the light. Moses calls him an idiot and says that he’ll save Karman. They’ll live on together because Moses refuses to let Karman become a memory. As the two huddle together in the shade, the sun peaks over the top of the roof.

Retrieved from "https://bloodplusanime.fandom.com/wiki/Episode_44?oldid=9900"
Community content is available under CC-BY-SA unless otherwise noted.