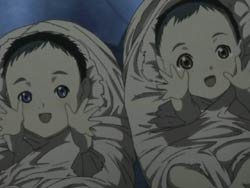 As he makes his escape, the remaining government official is demanding answers from Van Argiano. With the intent of returning to Washington, the official talks about enacting “Option D,” and then keeps Van from entering the elevator because he’s not American, leaving him with only a handgun. Inside the theater, on the stage, Diva wonders if Saya is going to kill her. Saya does indeed intend to do so because their existence causes people sorrow. Diva, however, thinks that it can’t be helped because she doesn’t understand man and man doesn’t understand their kind. Saya of course disagrees since her important friends and family are human. Even if she’s not connected to them by blood, Riku was her little brother and George was her father. But she also realizes that Diva doesn’t understand. Diva questions this, saying that they were born from the same mother. She finds it unfair that Saya gets to be happy and have fun. As the spotlight above them goes out, Diva returns to her original, long-haired form. She says that it’s really selfish since she was the one liberated by Saya from the tower. Saya replies that from that day on, the only reason she herself had been permitted to exist was to kill Diva. Looking hurt, Diva can’t believe that for the sake of proving her own existence, Saya would kill Diva.

Backstage, Hagi and Amshel’s fight has already started, but the two are able to dodge or deflect each other’s attacks. At first Amshel says that he hated Hagi, but then he corrects himself and says that he was jealous of how Hagi was to be Diva’s bridegroom. But now that Diva is a mother, Amshel doesn’t hate or envy Hagi any longer. He recalls that in the old days, he could be happy in exchange for buying a piece of bread. He suggests that they give thanks, causing Hagi to say that he is grateful to Amshel and Joel for letting him and Saya meet. Hagi then exposes his wings and both Chiropteran arms, showing Amshel that he’s serious. Amshel proceeds to take off his ring and place it on a mannequin bust, explaining that you need to behead or completely burn a Chevalier to kill him. He then turns into his Chiropteran form, which towers over Hagi. Hagi tries to attack him from above, but Amshel strikes first with a blast from his mouth. Saya and Diva notice that something’s going on when the stage starts shaking and a platform falls down under the stage. Diva turns Saya’s attention back to her, saying that the Chevaliers have the Chevaliers’ fight and the two of them have their own fun to be had.

Hagi got pushed out of the opera house by Amshel’s energy blast, but he manages not to take any damage. As the two Chevaliers fly over a stormy New York City, Amshel seems to have the advantage as he stays on the offensive and beats Hagi around. Back outside the Metropolitan Opera House, Lewis is playing decoy – because as he says, he’s tasty – as David and Kai run off. When Kai tells him not to die, Lewis responds by saying that he’s Invulnerable Lewis. But when one of the Chiropterans jumps at him, Lulu is the one to save him. She, in turn, calls herself Invulnerable Lulu. By this time, Hagi is hanging onto one of the eagle heads of the Chrysler Building. Amshel soon finds him and the fight resumes, this time with Hagi on a counteroffensive. He tears off a piece of Amshel’s shoulder, and then pierces through another energy blast to claw into Amshel again. The two rip up each other’s left wings at the same time, but Hagi pushes Amshel downward. Amshel ends up getting impaled by the spire of the Chrysler Building, whereas Hagi lands safely below. Hagi sees that Amshel is trying to pull himself up, off the spire, but then a bolt of lightning completely fries Diva’s Chevalier. With Amshel out of the way, Hagi remembers that Saya is still facing off against Diva.

Outside the opera house, David and Kai watch as Corpse Corps behead Chiropterans. Kai figures that the Americans wanted to bring the Corpse Corps to other countries, and David thinks that they would lie about a Chiropteran disease even though it was the Delta 07 that was really changing humans into Chiropterans. Kai then discovers the pink key that Saya had left in his pocket. Back inside, Saya and Diva clash their swords. Diva again confirms that Saya thinks Chiropterans shouldn’t exist in this world, and then wonders if Saya is going to murder her children. Diva finds her daughters quite cute and asks what Saya is planning to do. Saya says that it’s because she’s also a Chiropteran, and then decides that she has nothing more to say to Diva. Both girls wet their swords with blood, and the fight really begins. Nathan calls the sight beautiful, but then has to protect the two cocoons because Hagi returns. Nathan realizes that if Hagi is here, it means that Amshel was defeated. He tells Hagi not to overwork himself because he doesn’t have any intention of going against Hagi. He refers Hagi to the duel between the two queens and says that he’s only here to see it with his own eyes. Hagi lowers his Chiropteran arm and says that that’s why he’s also here.

Diva and Saya meanwhile have cut each other’s clothes to the point where they have to rip off pieces of their dresses that are getting in the way. Both of them re-bloody their swords and rush at each other in a final charge. Diva’s sword succeeds in piercing through Saya and Saya’s succeeds in piercing through Diva. Afterwards, the girls get rid of their weapons as they start bleeding from their wounds. As expected, Diva starts to crystallize, but surprisingly, Saya does not. A scared Diva doesn’t understand why it’s only happening to her, and a concerned Saya runs up to her to try to reattach her crystallized arm. As Diva collapses onto the ground and her face starts to crackle, Nathan brings over the two cocoons so that she can touch her babies one last time. Her final thoughts envision herself as a mother playing with her two daughters on lush green grass. Nathan pities Diva, saying that she only wanted a family, but that Amshel didn’t understand this. Still, Nathan thinks that Diva obtained it in the end – she hadn’t noticed that her own blood lost its power from bearing children. Nathan then approaches Saya, who starts taking steps backwards in order to keep her distance. He also explains that since Diva is dead, her Chevaliers have lost their meaning. Transforming into his Chiropteran form, Nathan hands Saya her sword and asks her to kill him, believing that as long as he’s alive, Saya’s wishes won’t get granted. Saya ends up doing just that with a slash upward right through Nathan’s body. Just before he collapses, Nathan thanks her.

With the fight over, Saya sees the rain coming through the roof, dripping onto Diva’s crystallized face as if she were crying. Hagi walks over and hugs her from behind, causing Saya herself to start bawling, though she stops when she sees Diva’s two babies emerging from their cocoon. Hagi volunteers to kill them for Saya if it’s too painful for her, but Saya decides to do it herself. However, after she bloodies her sword once more, Kai interrupts her and asks her what she’s doing. She apologizes to him, saying that she’s going to die. Her promise with Hagi was for him to kill her when everything was over. That’s why she has to kill these children and kill herself.

Retrieved from "https://bloodplusanime.fandom.com/wiki/Episode_49?oldid=10729"
Community content is available under CC-BY-SA unless otherwise noted.