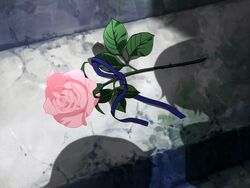 As the rain pours down on the Metropolitan Opera House, Van Argeno tries to fend off a Chiropteran with his pistol. But before it can strike him down, David hits the monster with his gun, saving Van. Outside, Lewis and Lulu see that the Corpse Corps and the Chiropterans have all become quiet. Perking her ears, Lulu notices that the song has stopped. As all the Chiropterans face up and start howling, Julia and Mao get a call at the apartment from David. He learned from Van that the military has enacted Option D, and so he asks the two women to gather some intelligence for him. Before hanging up, Julia tells David that he has to come back. Meanwhile, back inside the opera house, Hagi covers up Diva’s body and Saya prepares to kill the babies. She explains to Kai that they’ll surely be used as tools of war again. Conflict will erupt for their blood, and that’s something she doesn’t want to see anymore – she doesn’t want anyone else to get hurt. Saya apologizes to the giggling babies as she raises her sword against them. She believes that they must not live on, but Kai disagrees and questions who decided that. He promises that if there’s someone who won’t accept them, he’ll hit that person. And he’ll make her understand that she’s just a normal girl who cries a lot and eats a lot.

As Saya lowers her sword, unable to proceed, Kai continues on, saying that he’ll show them his love, wherever they are. That’s why he wants her by his side. Kai thinks that Hagi, who is now in between Kai and Saya, feels the same way, but Hagi simply says that he obeys Saya, doing everything according to her wishes. Kai responds by punching Hagi and angrily demanding to know who he is. Kai wants Hagi to say what he himself really wants, and he tries to confirm Hagi’s love for Saya. After a moment of silence, Hagi turns to Saya and tells her that he wishes for her smile – he wants to see again the smile from the time when they first met. Hagi remembers when he first woke up after becoming a Chevalier, the first thing she showed him were her tears. And then she took up arms, choosing to fight while trembling with anger. But when he found her back then in Okinawa, she was wrapped in a smile. The smile which he had wished for but could not give her was there, and the people who actually gave it to her were Kai and her family. Hagi says that he has lived as a Chevalier under Saya’s wishes, but only this once, he is going against her. As he kneels down beside her and takes away her sword, he tells her to live today for the sake of tomorrow – she doesn’t have to any longer. Hagi leans in and, after looking at her face for a moment, kisses the side of her head. In tears, Saya answers him back by kissing his cheek and saying that she wants to live. The two then share a true kiss. In Hagi’s arms, Saya says that she wants to live together with Kai and Hagi. As they hear the laughter of the babies, Kai claims that the children want to live too. After Hagi tells Saya that she can live how she wants from now on, Kai says that they can live today and laugh tomorrow. By turning to tomorrow and living their fullest, things will work out – nankurunaisa.

However, their happy moment is soon interrupted by David announcing that they have to get out of there quick because Option D has been put into operation. From the balcony above, Okamura remembers that Option D is what happened at the Yanbaru Facility, and Joel wonders if the government intends to erase the inconvenient Chiropterans into the darkness. Julia reports to David that strike aircraft have taken off from an aircraft carrier, meaning that they don’t have much time left. Kai and Saya each take a baby, and Saya says goodbye to Diva, whom she considers the other her, before she goes. Suddenly, something comes crashing through the roof and lands in front of Hagi and Saya. A large purple blast shoots out of the smoke, aimed at Saya, but Hagi manages to get her out of the way at the cost of his own left arm.

The person responsible is Amshel and he’s got his eyes on the children. When Saya refuses to give the babies up because they have a happy tomorrow waiting for them, Amshel powers up another blast. Hagi rushes in and kicks Amshel in the face before Amshel can fire, but then Kai hears the roar of aircraft above them. Although Saya flies directly towards Amshel with her sword bloodied, Hagi meets her halfway so she gives him the sword in a twirling maneuver that avoids another one of Amshel’s blasts. With all of his strength, Hagi stabs the sword into Amshel and pins him against the wall. Although Amshel immediately starts crystallizing, he still manages to plunge his arm into Hagi’s chest. Hagi yells for Kai to go and guide Saya in the future. As Saya starts calling out to Hagi, he responds by saying nankurunaisa and by telling her that he loves her. Giant sections of the opera house crash down on him soon after those words, and Saya tearfully yells out Hagi’s name one last time. The US military jets eventually drop their ordnance and blow up the Metropolitan Opera House, including all of the Chiropterans still alive.

Sometime later, Saya has returned to Okinawa and is once again in her school uniform. As she examines the re-growth on the tree stump in the school courtyard, Kaori comes over and playfully head-butts her. Saya pretends to be bleeding and then sticks her tongue out when Kaori realizes that she’s lying. After the two happily splash dew onto each other, they head home. Before they part ways, Kaori confirms with Saya the gathering that they’re having tonight at OMORO. The television news is meanwhile reporting that the blast from Option D was a terrorist act, but also that a special inquiry committee is looking into the ties between Secretary Grant and Cinq Flèches America. In fact, one of the reporters who is at the scene where Van is being led to the committee looks like Nathan. Back in Okinawa, Joel comments to Lewis and David that after Diva’s death, Chiropteran incidents have quieted down. He mentions how an enzyme that Julia found in Saya’s blood can be mass produced to silence the Delta Series forever, and Lewis thinks that it also can be used to prolong Lulu’s life. As for Saya herself, David says that she’s miraculously able to continue staying awake, but… It seems that Saya still needs regular blood transfusions, courtesy of Julia. Still, Saya’s health is pretty good, and so is Julia’s. Saya suddenly asks if she can touch Julia, and Julia consents, but notes that you still can’t tell from the outside. Indeed, Saya isn’t able to feel anything, and she thinks that when she eventually meets the child, it’ll already be an adult. Saya hopes that her nieces and Julia’s child can get along happily. When Lulu comes in looking for her, Saya gives her an empty pack of tomato juice and says tonight they’ll move the blood packs to this. She also tells Lulu of the gathering tonight that could make Lulu some new friends.

At home at the OMORO, Saya finds Kai cooking at the stove. When he asks her what was the most delicious thing in her boxed lunch, Saya answers that it was the boiled egg. Facing Saya, Kai suddenly asks about cutting her hair. The two then go outside where Kai remembers that their father used the same scissors he has now to cut their hair. As he snips away, Kai mentions that Okamura is going overseas again with Mao, this time to the Middle East. After the two talk about Joel coming tonight too, Kai asks Saya to close her eyes so that he can cut her bangs. He recalls how Hagi often fixed her bangs and that he hated Hagi at first. But now Kai knows that he and Hagi shared something in that they both only looked at Saya. Kai feels that Hagi will show up unexpectedly again, and that all Saya needs to do is to call him and he will come. Kai also vows not to forget about the people who fought together for her and about the man who loved her. Saya lowers her head at all this, but Kai lifts it up again and tells her not to face downward. He eventually finishes the haircut, returning Saya to how she looked back when this all started. She doesn’t like it when he then pats her on the head, but the two get interrupted when Kai’s friends start arriving. That night, the entire gang shows up at the Omoro and they have a party. While the others are still inside, Saya walks outside and stumbles to the chain link fence across from the restaurant. Tears form in her eyes as she looks at her father’s business, but she grows ever weaker and falls down. Fortunately, Kai catches her and offers to call Julia. However, Saya doesn’t want everyone to know and instead wants Kai to take her to the place where it all started. On his motorbike, he drives her out to the Miyagusuku gravesite where her cocoon had been. As he carries her on his back up the long set of stairs, Saya tells him that it’ll be soon and thanks him. Kai stops to tell her something, but it’s already too late – Saya is asleep. She had dropped a photo of herself, Kai, and Riku, which he now picks up and looks at. Addressing the sleeping Saya, Kai says that she taught him about the tomorrow he should live in. He believes that she fought not for her own happiness, but for everyone’s happiness. Kai vows definitely to make her happy, and then, with tears streaming down his face, he wishes Saya a good night.

Kai brings the two children back to the Miyagusuku Gravesite. The dark-haired girls want him to hold them and carry them on his back, but Kai instead addresses how they’re calling him “Kai” instead of “father.” The trio eventually arrives at the top where Kai notices a pink rose with a blue ribbon tied on it lying on the ground. From that, Kai suspects that that guy came. He tells the kids not to touch it because it’s auntie’s and changes the subject to the bento that he’s brought. The children run off happily with thoughts of the bento in their heads.