The Metropolitan Opera House is an opera house located at the Lincoln Center in the Upper West Side of Manhattan in New York City. 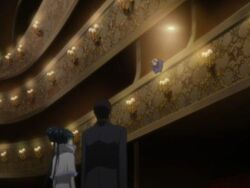 The Metropolitan Opera House is the place for Diva's grand last performance as well as the final duel of the two queens.

For the performance, the stage was set to match the Zoo. Diva makes her entry onto the stage accompanied by Grant and Bread. The final duel takes place on the stage as Saya enters and the two queens fight with all they've got while Nathan and Hagi watch from the audience. After Diva crystallizes from getting stabbed with Saya's blood soaked katana, Nathan leaves her daughters in front of Saya and invites her to kill him. The feigned death being staged, Saya is left with the option of killing her baby nieces and then dying herself in order to rid the world of chiropterans. Kai arrives just on time to smack Hagi to his senses who stops Saya. The final drama takes place on the stage as Saya and Hagi reveal their emotions and kiss.

Later, the place is shown to be bombed with everyone of Red Shield getting away just on time except Hagi who's stuck fighting Amshel inside the opera house.

Retrieved from "https://bloodplusanime.fandom.com/wiki/Metropolitan_Opera_House?oldid=9845"
Community content is available under CC-BY-SA unless otherwise noted.